Liverpool return to Premier League action this weekend when they face Newcastle United at Anfield on Saturday.

The Reds are the only team this season to manage a 100 per cent league record, winning all of their opening four games. Before the international break, they smashed Burnley 3-0 at Turf Moor and Jurgen Klopp will be eager to continue the winning run at the weekend.

Newcastle United, meanwhile, have had a shaky start to the new campaign but after springing a surprise at Tottenham, they’ll be keen to spoil Liverpool’s party at Anfield.

Klopp is unlikely to be able to call upon either Alisson or Naby Keita for the game against Newcastle as they continue their recovery.

Adrian has deputised well in Alisson’s absence so far and will continue to keep his place between the sticks.

Arguably the best right-back in the division, Alexander-Arnold is excellent going forward and will retain his place in the starting XI.

Matip has nailed down his place in Liverpool’s defence since the second half of last season. He is an undoubted starter against Newcastle.

Currently the best centre-back in the world, Van Dijk will be tasked to keep the physical Joelinton at bay.

Robertson is one of the first names on Klopp’s team sheet and will start at left-back on Saturday.

Fabinho has made that holding midfield position his own and deserves to keep his place in the team.

Klopp is blessed with a plethora of options in midfield and as Henderson played the full game for England against Kosovo on Tuesday, the Liverpool boss could go with Milner in midfield.

Generally, Wijnaldum starts on the left of midfield three but Klopp could use this as the perfect opportunity to hand Chamberlain a start against a leaky Newcastle defence.

With his blistering pace and close control, Salah could cause all kinds of problems for Bruce’s side on Saturday.

Firmino makes the Reds tick in attack and should start up front against the Magpies.

An absolute nightmare to play against, Mane will hope to help his team win all three points at the weekend. 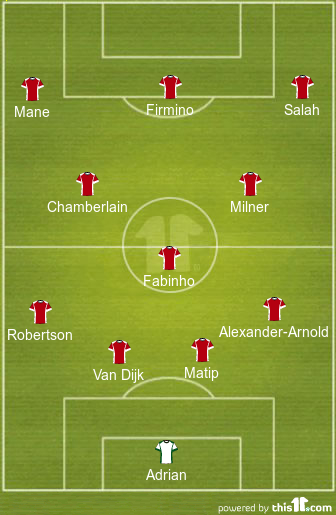