Reigning champions Liverpool will aim to begin their Champions League campaign on a high when they face Napoli at the Stadio San Paulo on Tuesday.

The holders and Napoli are familiar foes from last season but they are grouped with an easier set of teams – Red Bull Salzburg and Genk, as compared to Paris Saint-Germain and Red Star Belgrade.

Jurgen Klopp’s side have made a perfect start to their 2019-20 Premier League campaign – winning all five matches to sit five points clear at the summit. However, they face a tough game against a Napoli side certainly capable of ending the Reds’ winning run.

Alisson Becker has returned to light training and will return after the next international break. Naby Keita is recovering from a hip injury that should rule him out against Napoli, although he could be fit to face Chelsea at the weekend.

Divock Origi suffered a twisted ankle during Liverpool’s clash with Newcastle on Saturday and is unlikely to be involved in Italy.

With Alisson still out, Adrian will continue to keep his place between the sticks.

One of the best right-backs in Europe, Alexander-Arnold will retain his place in the starting XI.

Matip has been fantastic of late for Liverpool, silently nailing down a place in the team. He is an undoubted starter against Napoli.

Currently the best centre-back in the world, Van Dijk will look to keep Dries Mertens and co. at bay on Tuesday.

Robertson is one of the first names on Klopp’s team sheet and will start at left-back.

Fabinho is an absolute workhorse, does the donkey work in the midfield and keeps things ticking over for his team.

Henderson was an unused substitute in the 3-1 victory over Newcastle; so, Klopp could look to add more steel in his midfield by including him at Stadio San Paulo.

Wijnaldum adds a lot of industry and energy to the Reds’ engine room. He should complete Liverpool’s midfield trio.

Salah scored in the win over Newcastle and will be keen to get on the score sheet again on Tuesday.

Mane has started the season brilliantly and will look to help his team start the Champions League campaign with a positive result.

Firmino was the game-changer against Newcastle at the weekend. The Brazilian is one of Liverpool’s important players and will start at Napoli. 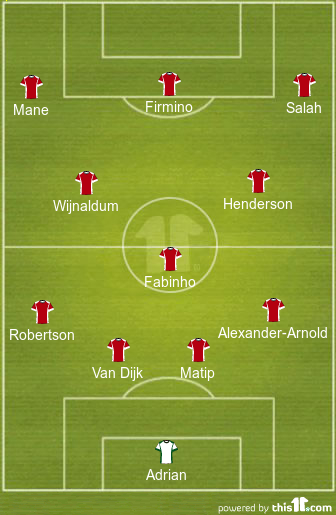