Table-toppers Liverpool welcome Leicester City at Anfield on Saturday hoping to maintain their unbeaten record in the Premier League.

The Reds have won their opening seven games of the new season and on Wednesday, edged a 4-3 thriller against Red Bull Salzburg at home in the Champions League. They conceded three goals against the Austrian giants, meaning Jurgen Klopp will expect his boys to defend well at the weekend.

Leicester go to Anfield in high spirits after putting five past Newcastle United in a dominant victory on Sunday to put them back up to third.

Joel Matip missed the Salzburg game with an unspecified injury but he’s likely to be back for the weekend game. Xherdan Shaqiri has a little tear in his calf and is expected to miss out again.

Meanwhile, Alisson Becker is recovering from the calf injury he had sustained on the opening day of the season, but Klopp is unlikely to rush the Brazilian.

Alisson is still recovering, so Adrian is very likely to continue guarding the goal.

Alexander-Arnold has cemented his place at right-back and there is no way he won’t feature against Leicester.

Missed the Salzburg game and that really impacted Liverpool’s defence. However, Matip will be back for Saturday’s game.

The Salzburg game will probably be his weakest display of the season. Van Dijk will be raring to produce a solid display and keep the red-hot Vardy at bay.

Robertson provides so much going forward that makes him perfectly suited to Liverpool’s style of play. He’ll keep his place at left-back.

Fabinho had a poor game against Salzburg and will be aiming to put in a better performance against the high-flying Foxes.

Wijnaldum also wasn’t at his best on Wednesday, guilty of a few sloppy passes. He’ll be aiming to make a mark at the weekend.

A leader on and off the pitch, Henderson will look to lead the team from the front against Brendan Rodgers’ side.

Scored a brace in the 4-3 win over Salzburg and will be hungry to get on the score sheet at the weekend.

Produced a big performance when his team needed him most on Wednesday. The Senegalese, who is likely to come up against the nippy Ricardo on Saturday, will be keen to guide the Reds to another three points.

Firmino’s link-up play and spatial awareness make him one of the most important players for the Reds. He’s likely to lead the line. 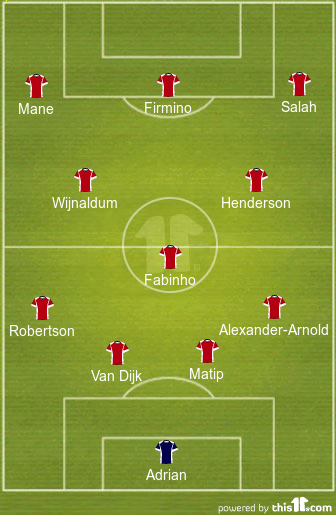