The Reds won their last Champions League game—a 4-3 thriller against Red Bull Salzburg at Anfield. They’ll be hoping to beat KRC Genk after a disappointing 1-1 draw with Manchester United at Old Trafford in the Premier League.

Jurgen Klopp’s men have three points from their opening two games in the Champions League and they’ll be looking to snap a poor losing streak of away form on Wednesday.

Mohamed Salah missed the game against Manchester United with an ankle injury and remains doubtful for the trip to Belgium. There was good news for Liverpool on Sunday, however, as Alisson returned in goal for the first time since August.

Alisson returned from injury against Man United but couldn’t keep a clean sheet. However, he’ll be desperate to keep one on Wednesday.

Alexander-Arnold has cemented his place at right-back and he is likely to start against Genk.

Matip has been excellent for the Reds since the start of the new season and deserves to keep his place in the side.

A leader and commanding presence at the back, Van Dijk will be aiming to keep the Genk attackers at bay.

Robertson provides a lot of energy and attacking prowess down the left flank and his place in the starting XI is obvious.

Fabinho brings a calming influence to the team, useful in neutralizing the opposition’s threat.

Chamberlain looked lively after coming as a substitute against Man United. He could be handed a start at Genk in the Champions League.

Keeping one eye at the weekend game against Tottenham, Klopp could freshen up things in midfield by bringing in the industrious James Milner in his starting XI on Wednesday.

Mane generally plays on the left flank but with Salah a doubt, he could start on the right for the upcoming European fixture.

Origi gives a different dimension to the Liverpool attack. He is likely to start on the left flank.

Firmino was ineffective against Man United but he’ll be hoping to make a mark on Wednesday and help the Reds to all three points. 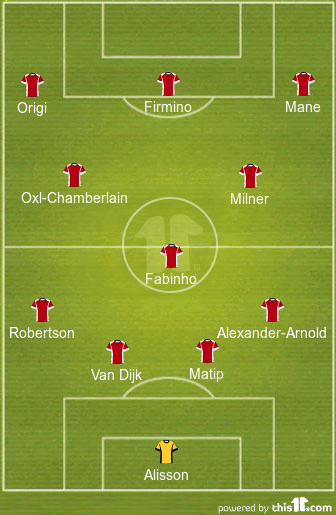