After beating Bayern Munich away in the Champions League, Liverpool will be looking to keep their confidence level up when they face Fulham in the Premier League at Craven Cottage.

The Reds are currently one point behind leaders Manchester City, with eight games to go. Both teams are in the last-eight of the European competition, meaning that can have an impact in the latter part of this season.

On Sunday, Liverpool are up against a Fulham team who are in trouble of getting relegated and might give it their all to get something out of their home games. Hence, it won’t be easy for Jurgen Klopp’s men.

Since City play in the FA Cup on Saturday, the Reds have a chance to go top of the league by beating the Cottagers and heap the pressure on Pep Guardiola’s men before they play their game in hand.

Jordan Henderson hobbled off very early in the Bayern game and is expected to miss this fixture. Joe Gomez will be back after the international break, while Alex Oxlade-Chamberlain would take more time to recover his full match fitness.

Naby Keita missed the Munich trip with a minor injury and is touch and go for this game.

He is their first-choice keeper and continues to start in goal for every league game.

The youngster stood up well in a tough game at Munich. He would be looking to do the same on Sunday.

Since getting the opportunity, Matip has been imperious at the back alongside Virgil van Dijk.

He scored in the midweek and remains a colossus at the back. The Dutchman is probably an irreplaceable cog in this team.

The Scotsman is the undisputed first-choice left-back in the team and is expected to start against Fulham.

He has been doing well in defensive midfield for Liverpool. With Henderson out, there is no doubting the Brazilian’s place in the team for this weekend’s game.

The Englishman did very well against Burnley in the previous league game and could get another start.

Georginio Wijnaldum has played a lot of games in the past few weeks and deserves a rest. Milner, who missed the Burnley game and played well in Munich, should get a nod in the midfield.

The Egyptian has stopped scoring in the past month but his attacking contribution remains important to the team. However, he would be aiming to end his drought.

He is their main link man in the attack and a vital player for Liverpool. The Brazilian is without doubt a starter on Sunday.

He is probably one of the in-form players in Europe. The Senegalese star continues to be a star for the Reds and would be aiming to keep his scoring streak going when he faces Fulham. 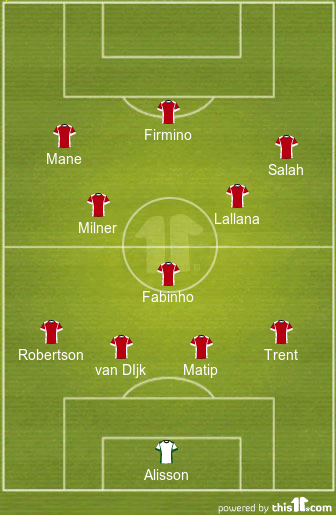