The UEFA Super Cup is one of the most scintillating events in world football and this time, the match will be played between two English teams.

Liverpool, the winners of the Champions League, will face Europa League winners Chelsea in what promises to be a blockbuster game. There is a lot of hype surrounding the game already. For the first time, a major men’s match will be refereed by a woman, Stephanie Frappart.

As far as Liverpool are concerned, they have started their Premier League campaign on a delightful note. After a solid 4-1 win vs Norwich City, Jurgen Klopp’s men must be determined to earn the bragging rights over rivals Chelsea.

Klopp has confirmed that Alisson will miss out on this game after succumbing to an injury against Norwich. Besides that, he has no other injury concerns. However, Nathaniel Clyne continues to a long-term absentee.

The summer arrival filled in for Alisson against Norwich and it looks like he will do the same against Chelsea as well.

After a fantastic season, Robertson has picked up from where he left off and should find himself in the starting XI for this one.

Lovren has the potential to work wonders on his day and should receive a start against Chelsea.

With a long and gruelling season ahead, it would be best for Klopp to rest Virgil van Dijk and deploy Matip.

The searing youngster is lethal down the right and he must retain his spot to trouble Chelsea.

Milner is one of Liverpool’s most crucial players and is capable of turning the game around in an instant. Starting him should be a no-brainer for Klopp.

This game could see Lallana receive a start and if so, the player should do everything to impress his manager.

Keita is capable of a lot of wonderful things and he would be ideal to partner Lallana in the midfield.

Salah and Liverpool have become synonymous with one another. If Liverpool are to walk away with a win, Salah’s presence will be of paramount importance.

Origi’s pace and finishing skills would provide an outlet for the Reds to score some goals.

The Brazilian is one of Liverpool’s most hardworking players and he deserves to receive a start for this encounter. 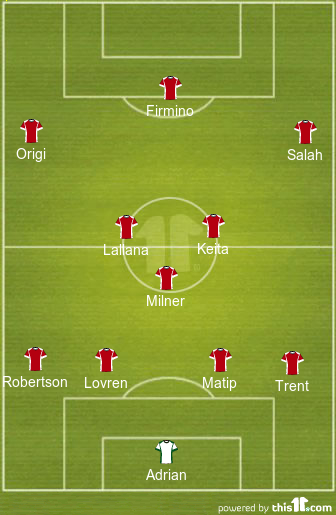