Liverpool would be aiming to keep their winning form going when they face Chelsea at Anfield on Sunday. The Reds are currently on top of the table, having played a game more. They could kick off this game placed second, as Manchester City play before against Crystal Palace.

After stuttering in February, Jurgen Klopp’s men have picked up some winning form in the last few weeks. They have shown grit, character and determination to keep on going and get the points.

If Liverpool are to win on Sunday, they would have to channel all those things plus the quality on the pitch.

Adam Lallana was out for the previous two games and it will be touch and go for this weekend. Alex Oxlade-Chamberlain is working hard on making a comeback but it seems likely that he won’t feature for the first-team this season.

The youngster is quality going forward, however, he will have a tough job of defending Eden Hazard on that side of the pitch.

He was rested for the Porto game and is expected to return to the XI against Chelsea.

The Dutchman is one of the irreplaceable cogs in the team and starts almost every game for them.

The Scotsman was suspended for the Porto game, which would have allowed him to take some rest and recover for Sunday.

The Brazilian has been impressive in defensive midfield and should start the remaining games for Liverpool.

The captain has really enjoyed playing in a slightly advanced midfield position. He is expected to do the same on Sunday.

He was rested for the Porto game, hence, should be back in the XI ahead of Naby Keita to add more physicality and pressing power in the midfield.

He broke his league drought against Southampton last Friday and would be aiming to score against his former team.

The Brazilian is one of the most important players in the team and probably one of the first names on the teamsheet.

The Senegal international has been in great form since the turn of the year. He would be looking to cause trouble to the Chelsea defence. 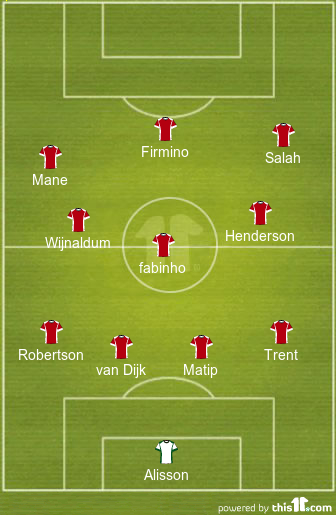