Predicted Liverpool line-up to face Bournemouth in the Premier League

Liverpool continued their unbeaten start to the season by picking up a 3-1 away win against Burnley in mid-week. The Reds have kept the pressure on leaders Manchester City while also creating a six-point gap between third-placed Tottenham Hotspur.

Jurgen Klopp will now turn his attention to the clash against Bournemouth this weekend.

Joe Gomez was stretchered off against Burnley and will surely play no part against the Cherries. Sadio Mane is also a doubt after picking up a slight injury during the weekend. Dominic Solanke and Dejan Lovren are also out and will be unavailable for this game. Andrew Robertson should be back given he only suffered a dead leg against Everton.

Was unfortunate not to keep a clean sheet but did very well once again in goal. He will surely keep his place.

The right-back should return to the line-up after coming on as a substitute in the last game. His raids down the flank should cause all sorts of problems.

With both Lovren and Gomez out injured, Matip should continue to partner Van Dijk at the back.

The Dutchman was a colossus against Burnley and picked up an assist. He will surely start this game.

Robertson should be back for this game to replace Alberto Moreno at left-back. The Scot is vital to the Reds’ defence.

Milner should start in central midfield as he always works hard. The midfielder scored the equaliser against Burnley as well.

The Dutchman was rested against Burnley and will return for the clash against the Cherries. He will sit in the middle of the park and dictate the play.

After an impressive showing against Burnley, Keita will surely keep his place in the squad to face Bournemouth.

The Egyptian was also a substitute against Burnley and will return to the starting XI to cause problems down the right flank.

Firmino got back to scoring ways against the Clarets. The Brazilian should now maintain consistency in front of the goal.

With Sadio Mane a doubt for this game, Shaqiri could start on the left hand side for Liverpool. The Swiss international picked up another goal for the Reds, against Burnley. 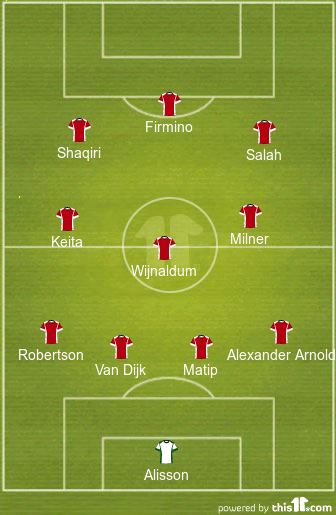