Liverpool to action after a 10-day break, with a Champions League last-16 first leg tie against Bayern Munich at Anfield. After getting the better of Bournemouth, Jurgen Klopp’s men went on a four-day training camp trip to Marbella and landed back in Melwood on Saturday.

They are currently second in the league on goal difference, having played a game less. The Reds are up against a Bayern side who have picked up some form since the turn of the year. Niko Kovac’s men are second in the league table and are coming into this game after claiming a come from behind win against Augsburg on Friday.

Dejan Lovren is a doubt for this game. Xherdan Shaqiri missed the Bournemouth game but is expected to feature against his old team. Alex Oxlade-Chamberlain is back in full training after a long-term injury but he will take time before returning to action.

Joe Gomez is out for another four to five weeks after his surgery. Virgil van Dijk is suspended for the first leg.

He has started every league and Champions League game thus far and is expected to do the same tomorrow.

He played for 15 minutes against Bournemouth after returning from injury. The youngster got a 10-day break to fully recover, hence, he is expected to start this game.

He is the only available centre-back for this game and will start against the Bavarians.

With van Dijk suspended and Lovren not expected to be fit, Fabinho should start at the back alongside Matip.

He is Liverpool’s undisputed number one left-back and starts almost every league and Champions League game.

The captain will have to protect a back-line that can be called as make-shift at best. His positional play against the midfield runners of Bayern would be key while defending.

He is one of the key midfielders in the team and should start on the right-hand side of the midfield, looking to drive the team on.

We have seen what Keita can bring to this Liverpool team in the past couple of games. The Guinean international knows all about playing Bayern, having played for RB Leipzig until the end of last season.

There is not much to choose between the front three and Mane will start on the left-hand side.

He is at his best when playing the false-9 role and creating space for the other two strike partners. A sure starter.

The Egyptian would be aiming to play on the right-hand side and cut inside to link up with Firmino. 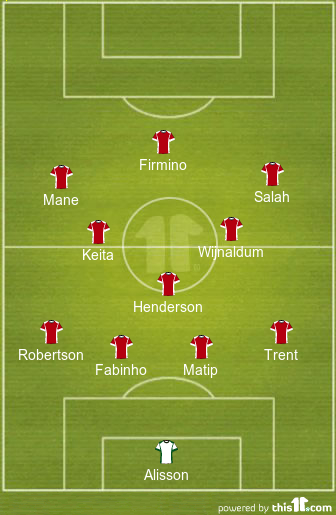