Liverpool picked up a superb win against Napoli at home to qualify for the Round of 16. The Reds put in a composed and disciplined performance throughout the game. They are also the only unbeaten team in the Premier League at the moment.

But that status will be tested when Manchester United visit Anfield this weekend. The Red Devils lost once again to Valencia in the Champions League and have been very inconsistent. Klopp will definitely aim to come away with a strong home win against their arch-rivals.

Joel Matip has joined the sidelines and will miss up to six weeks. Klopp has only Dejan Lovren left in the centre-back department apart from Van Dijk. Trent Alexander-Arnold also suffered a slight injury and will most likely not be risked. James Milner came away with cramps as well but should feature against Manchester United.

The Brazilian made another match-winning save against Napoli and will surely keep his place in the squad.

Milner should start at right-back if Trent Alexander-Arnold sits out this game.

Lovren should come into the line-up for Joel Matip. The Croatian has a big task on his hands.

Van Dijk was superb against Napoli as well and will continue at the back for Liverpool. A sure starter.

The Scottish international raids very well down the flanks and will start at left-back in this game.

The Dutchman dictated the play well and showed some good work rate against Napoli. He will start this game in central midfield.

Henderson needs to be more aggressive. His passing has been good though and he should continue in central midfield.

The Guinean could start at left central midfield. He was a substitute against Napoli.

The Egyptian is in fine form at the moment and looks like the Salah of last season. He will start on the right wing.

Firmino linked up well and picked a couple of good passes in the final third. He will lead the line.

Read more: Go for it Klopp – Liverpool’s attack would become highly creative with the arrival of this top-class Bundesliga talent in January

The Senegal international winger’s finishing was very poor in the last game. He has to do better in this game. 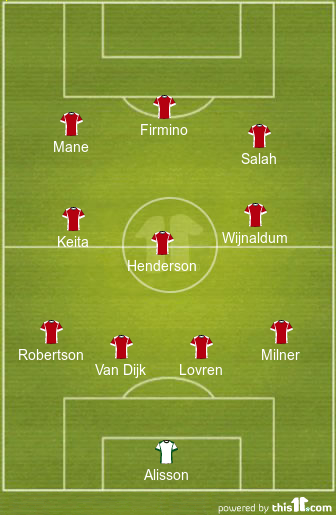