Fulham welcome Nottingham Forest to the Craven Cottage on Sunday as they look to make it four wins on the trot in the Championship.

The Cottagers demonstrated why they are strongly fancied to make an immediate return to the Premier League with a thumping 4-0 victory over Millwall on Wednesday. They dominated the game from start to end and deservedly won all three points at home.

Scott Parker’s Fulham will now come up against Nottingham Forest, who drew 1-1 with Charlton Athletic on Thursday.

Fulham have no fresh injury concerns ahead of Saturday’s game.

Bettinelli is Fulham’s first-choice in goal and he should continue on Saturday as well.

Sessegnon has started the last two games at right-back and looked comfortable on both occasions. He is set to continue in that position.

Mawson has looked solid, keeping things tight at the back this season thus far. He should continue in central defence.

Ream has been preferred ahead of Le Marchand and the American has repaid his manager’s faith.

An explosive left-back, Bryan will look to join the attack as much as he can, down the left flank on Saturday.

Arter’s presence in the deeper role gives Fulham attackers the free license to create their magic in the final third of the pitch.

Cairney has enjoyed a free role in Parker’s system, which has helped him get on the ball more and influence the game.

A tireless worker, Johansen provides the Cottagers’ midfield with more energy and bite. He is an undoubted starter on Saturday.

Knockaert headed his first goal for the club in the 4-0 win over Millwall. His speed and trickery on the ball make him such a dangerous player to come up against.

Cavaleiro scored twice in the midweek, with the first goal being an absolute peach at Craven Cottage. He is a real livewire and should start on the left flank.

Mitrovic has three goals in four games, with the big Serb also scoring against Millwall. He is expected to lead the attack when Nottingham Forest visit Craven Cottage. 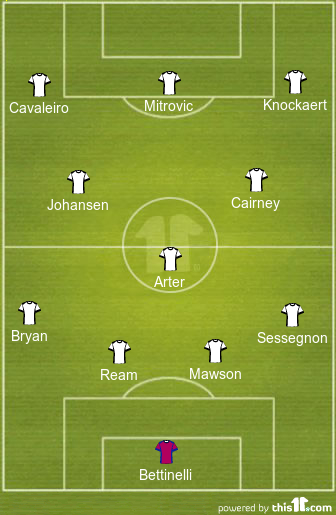