After claiming an impressive win over Brighton, Chelsea would be aiming to keep their recent winning form going when they face West Ham at Stamford Bridge on Monday.

Maurizio Sarri’s men were slightly lucky against Cardiff, but showed signs of brightness in the midweek clash with Brighton. They are currently fifth in the table and might have to win all of their remaining six games if the top-four finish is to come in sight.

However, the game against West Ham won’t be easy as the Hammers are coming into this game on the back of a disappointing loss last weekend. Hence, expect a closely-fought London derby on Monday.

Marcos Alonso missed the Brighton game with a hamstring injury, hence, it would be touch and go for Monday.

Pedro also missed the midweek clash with a minor injury and he will be checked at the weekend. Ethan Ampadu has a back injury and . Chooseno return date has been put in place.

The Spaniard is Chelsea’s first-choice keeper and is expected to be in the line-up on Monday.

He continues to be their first-choice right-back and is expected to be in the XI on Monday.

He replaced Rudiger and did a good job against Brigton. Hence, the Dane deserves another chance to impress.

The Brazilian is their first-choice centre-back and should be in the XI against West Ham.

Marcos Alonso is touch and go for this game, hence, we could continue to see Emerson at left-back.

He is Sarri’s main man in defensive midfield and an almost certain starter in all league games. It won’t be a surprise to see him in the line-up on Monday.

The youngster scored a great goal against Brighton and impressed the Stamford Bridge crowd. He should get another chance to show his skills against the Hammers.

There is no disputing his place in the team. The Frenchman continues to be a key player and is expected to start on Monday.

The Belgian star also scored a fantastic goal in midweek and would be aiming to do something similar against West Ham.

The Frenchman replaced Higuain and scored against Brighton. He is expected to lead the line on Monday.

His first Premier League start in the midweek was a real positive for Chelsea. Hence, we can expect the Englishman to keep his place for the next game. 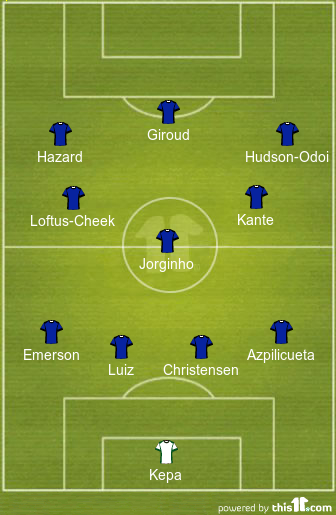