Predicted Chelsea line-up to face Vidi in the Europa League

Chelsea will be aiming to continue their resurgent form when they face Vidi in the Europa League away from home this Thursday.

After a disappointing loss at Wolves last week, the Blues hit back with a tremendous performance against Manchester City and won the game. That must have uplifted their confidence for the busy festive fixtures coming up.

Though Maurizio Sarri’s men are already through to the knockout round of this competition, keeping the momentum going would be key. They face a Vidi side who are currently second in the Hungarian top-flight league.

Mateo Kovacic had a slight injury issue against City and he went off before the final whistle. Other than that, Sarri doesn’t have a large list of injured players in his squad.

The Argentine might get a start ahead of Kepa for this game as the latter could be rested.

The Italian usually starts the cup games and the same will be the case on Thursday, with Cesar Azpilicueta more than deserving a rest after shutting out Leroy Sane.

The Dane also starts only in cup games on the evidence of the season thus far. We may see him in action on Thursday.

The veteran is way down the pecking order for the centre-back position. He has to contend with playing the cup games.

The Brazilian is expected to start as we see Marcos Alonso getting a rest after tireless performance against the Cityzens.

Jorginho is almost certain to get a game off on Thursday, hence, we could see Fabregas back in action at defensive midfield.

The Englishman has had a fine Europa League campaign so far and should continue to start in this competition.

Barkley came off the bench against City and hence, he might get a nod from the start on Thursday.

The exciting young talent prospered the last time he played for Chelsea. He is expected to be given another chance on Thursday.

The Frenchman was on the bench on Saturday but didn’t feature. He may start this game then.

Read More: Go for it Sarri – This Shakhtar Donetsk star could be the man to fuel Chelsea’s title charge in the second half of the season

The Spaniard was one of the shining stars in the team when they beat Manchester City. He is expected to keep his place at right wing. 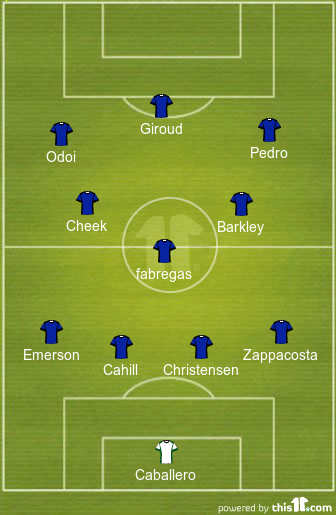