Chelsea lost the EFL Cup final to Manchester City on penalties as misses from David Luiz and Jorginho turned out to be very costly for Maurizio Sarri, who was aiming for the first trophy of his professional managerial career.

The Blues must now look to bounce back by beating London rivals Tottenham at Stamford Bridge in what promises to be a gritty encounter between the two powerful sides. With Harry Kane now back fully fit as well, Chelsea will have a tough task on their hands come Wednesday.

Dutch midfielder Marco Van Ginkel remains out of contention for this crucial fixture as he is still nursing an ACL injury that he picked up earlier this season.

Davide Zappacosta could be back from his illness but isn’t expected to feature in this game while the English duo of Danny Drinkwater and Gary Cahill is ruled out with and back injuries respectively.

The Spaniard’s antics in the final of the EFL Cup was worthy of criticism and he will be looking to prove the haters wrong.

Like the rest of the team, he put in an assured performance and he must mimic that against Spurs to maintain the pace in the top four race.

The German international’s consistency has been commendable and his strength will be crucial in stopping Heung-Min Son.

The Brazilian will have to be on his toes again this time out as he faces a different sort of challenge in Harry Kane.

The Brazilian put in an inspired display against City and must keep his place in the starting XI at home against Spurs.

The Frenchman’s dominance in the middle of the park will be integral to Chelsea’s attacking play against the rivals.

Had a solid display against City but still got caught in possession a few times. A dynamic Spurs side could spell trouble for him.

Barkley was given the nod in midweek so the Croatian World Cup runner-up is expected to start this game in the midfield.

The Brazilian had a good game and was unhappy to come off so he will be raring to go as Tottenham visit the Bridge.

Didn’t feature until very late against City, so he will be fresh and eager to get on the scoresheet against a talented Tottenham side.

The Belgian epitomises balance, and his movement in and around the box will be crucial in penetrating this rather stubborn Spurs defence. 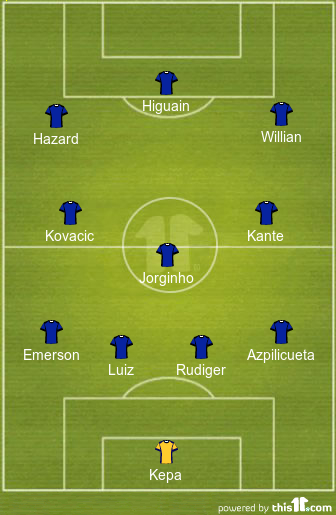