Predicted Chelsea line-up to face Tottenham in the Premier League

Chelsea would be seeking to continue their unbeaten start to the season when they face London rivals Tottenham Hotspur at Wembley on Saturday. In a fixture that has a rich history of talking points and controversies, there is no certainty of where the game would tilt until the final whistle is blown.

As we finish the final international break of 2018 and look forward to the festive period, there is no better way to start the proceedings than staging a London derby between clubs that are third and fourth in the Premier League table.

Mateo Kovacic didn’t feature for Croatia in the UEFA Nations League game against England as he suffered a minor muscle injury. Ethan Ampadu has a knock and wouldn’t be considered on Saturday.

The Spaniard has been a secured presence in goal for the Blues. He is slowly but surely proving why the club paid big bucks for him.

The experience of Azpilicueta will be a key component in such a tough away game to a direct rival in the league.

The German has been in great form for the club this season. The change in manager has probably helped him.

After a suspicious 2017/18 season, Luiz is looking at his best under Sarri and should start every game.

The ever-ambitious full-back is pure quality when it comes to going forward. However, he needs to be dedensively careful against a very good Spurs team.

The midfield orchestrator knows the Sarri-ball inside out and would be aiming to implement that on Saturday.

Even though a slightly advanced midfield role doesn’t suit him, Kante continues to impress and gives his best for the team.

As mentioned above, Kovacic had a minor muscle injury last weekend, hence, we could see Barkley get a start.

Willian played Brazil’s friendly against Senegal on Tuesday night, therefore, we may see Pedro in action ahead of the Samba boy.

The Spaniard did score a few goals before the international break to restore his confidence, however, he missed an open goal chance for Spain that would have hit his morale badly. Chelsea fans will be hoping that he keeps his shooting boots on against Spurs.

Read More: Who is this promising 18-year-old Brazilian on Chelsea and Tottenham’s radar? A talent worth pursuing?

If the Blues are to get a win or a positive draw, Hazard has to be at his best in the final third. 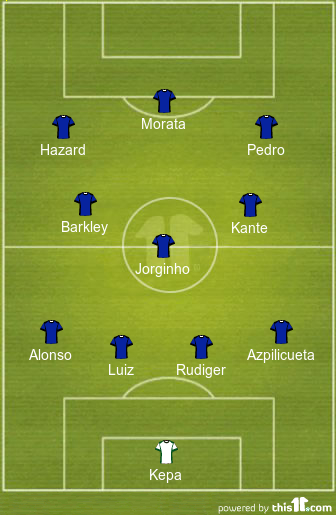