Predicted Chelsea line-up to face Southampton in the Premier League

An in-form and flying Chelsea face a twitchy Southampton team at the St.Mary’s Stadium. Maurizio Sarri’s men played a fantastic game to get a point against Liverpool last week, and are still unbeaten in the league this season. As per the early evidences, they are certainly in for the title race.

However, to become a champion, the streak must continue when they meet Mark Hughes’ men who are completely out of form in the league. In any case, an away game in the Premier League is never easy.

With regards to injury concerns, Sarri is a lucky man at the moment. He has a full strength squad to pick his line-up from for this game.

The Spaniard is slowly but surely cementing his status as one of the best in the business.

The experienced right-back was rested for the Europa League and he needed that. He should be back for Sunday’s game.

The combination of Rudiger and David Luiz was fantastic against Liverpool. They are forming a great partnership at the back.

The Brazilian is going from strength to strength this season under the new management of Sarri.

Another player who has been good this season and is justifying that he can do well at left-back as well.

The pass master of the team and the midfield enforcer. Jorginho is key to what the manager likes his team to do.

The Frenchman has done pretty well to adapt to his new position. He is also one of the vital players in the team.

The Real Madrid loanee showed against Liverpool that he is one of the better passers in the game. He could play a big part for the team this season.

He is the spark and life of the team. Chelsea are rather dependent on Hazard to deliver the goods on a regular basis.

Morata scored in the Europa League to regain some form, but Sunday may come too soon for him to regain his place in the regular eleven. Hence, Giroud is expected to start.

The Spaniard was easing his way back on Thursday after his shoulder injury. With Willian playing games every three days in the past two weeks, Pedro should start this game. 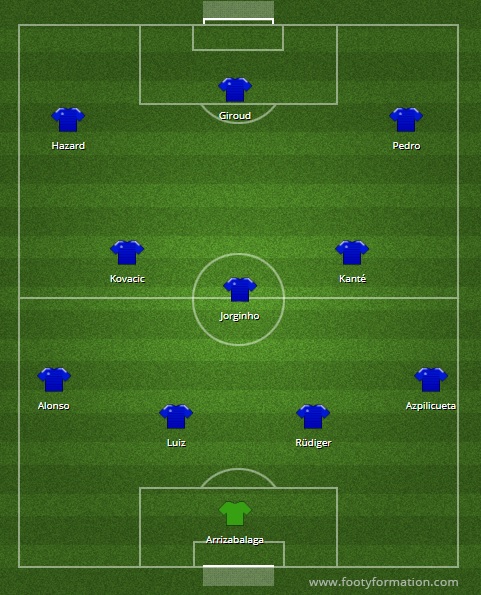