Last time out, Chelsea fell to another embarrassing defeat at Stamford Bridge as Ole Gunnar Solskjaer’s Manchester United beat the Blues 2-0, thanks to goals from Paul Pogba and Ander Herrera. Chelsea put in an extremely lacklustre display which gave the United defence no real moments of concerns.

They will be eager to bounce back ahead of what could be a very important week for Chelsea. After this Europa League tie against Malmo in midweek, they go on the face Manchester City in the final of the EFL Cup on Sunday, which makes this even more important in terms of gaining some much-needed momentum.

Marco Van Ginkel remains sidelined for this fixture as well as he is still nursing a long-term injury. Ruben Loftus-Cheek could be back for Chelsea as well after quickly recovering from his recurring back problem.

There is expected to be a lot of changes in the starting XI given the magnitude of the match that awaits them at the weekend. Expect some key players to be rested as they will be looking to avoid another drubbing by Manchester City at all costs.

Had a relative howler against United where he could’ve easily stopped the second goal had he got a stronger palm.

The Italian was a substitute in the game against United and will feature from the start to give Azpilicueta a much-needed rest.

The Welsh prodigy can play in the midfield or defence, and with Gary Cahill currently out of favour at Chelsea, expect him to start.

The Dane has been excellent for the Blues whenever Sarri has used his services and, he will be an important part of this home tie.

Former AS Roma left-back Emerson hasn’t got enough opportunities to prove himself and must take this one to really impress the gaffer.

The Englishman came on as a substitute against United to no real effect. Will be keen to show Sarri that he deserves to start against City.

The man whose role is debatable, he was dreadful against Ole’s Man United and must improve quickly.

The Croatian was withdrawn to be replaced by Barkley against United but he could start, leaving Kante to have a rest.

The Brazilian had a slight effect on the game when he came on against United but he really didn’t do much to bring Higuain into the game.

He got a goal in the first leg and will be eager to make the Europa League starting role his own by pulling off a good performance at Stamford Bridge.

The young starlet was an unused substitute on Monday and will be raring to go. With 2 away goals in the bag already, this is the perfect chance to give him a start. 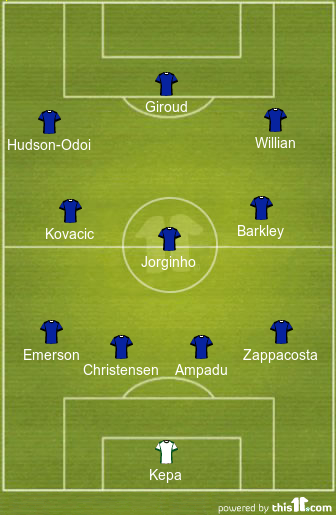