Chelsea fans are bound to be quite happy at this moment in time despite having a rather treacherous February which saw them drop out of two tournaments with them losing one of them in the final to Manchester City.

They did show heart and desire in that performance though and then welcomed Tottenham to Stamford Bridge for their next fixture and they completely outdid all of Spurs’ hard work from the start of the season in the hunt for a title. The Blues will be hoping to pick up another derby win against Fulham.

Out-of-favour English duo Gary Cahill and Danny Drinkwater have both been ruled out of contention for this fixture, having picked up back and shin injuries respectively.

The Spaniard was dropped for the Spurs game after his antics in the cup final but is expected to be given a start here by Sarri.

His smart ball to Pedro allowed Chelsea to open the scoring against Spurs and he will start this game.

The German machine has been a rock at the back over the last two games and looked excellent in their shootout defeat to City.

The Brazilian was able to make all of Harry Kane’s goalscoring attempts seem futile in the last game is expected to start.

Marcos Alonso was given the nod against Spurs so expect the Brazilian full-back to return against the Cottagers for this derby.

The French midfield destroyer was sublime against Spurs and won the ball back for the Blues on a number of occasions.

The Italian’s performance in the midweek was still ridden with silly errors and lapses in concentration and that needs to change and fast.

Croatian international Matteo Kovacic played the midweek game, which means that the former Everton man is expected to start in the midfield

The Brazilian had to come off the bench to replace Hazard in the game against Tottenham and is expected to start.

The Argentine is yet to really impact this Chelsea team and the players around him have to work hard to match his wavelength very soon.

The Belgian wizard is the first name of the team sheet irrespective of the fixture and his mazy runs can wreak havoc in the Fulham defence. 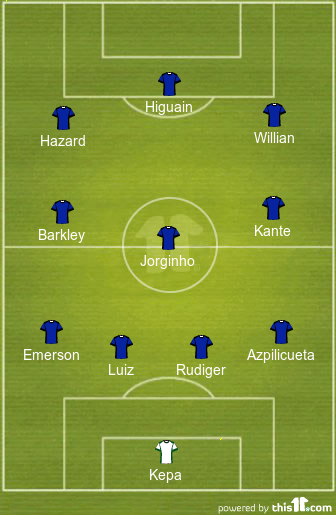