After thrashing Dynamo Kyiv in the second leg of the Europa League last-16 tie, Chelsea must be aiming to get back to winning ways in the league when they face Everton away at Goodison this Sunday.

The Blues dropped points at home to Wolves last week, leaving them a bit behind in the top-four race. Maurizio Sarri’s men now have to make sure that they keep the league avenue open for getting into next season’s Champions League.

They are up against a Everton side who threw away a two-goal lead at Newcastle United. Hence, on the confidence side, Marco Silva’s men are staring down the barrel. However, they seem to turn up against the big boys at Goodison.

Hence, it won’t be easy for Chelsea and we should expect a cracking encounter between the two teams.

Gonzalo Higuain was ill and didn’t feature in Kiev. He was anyway expected to be rested for that game. However, the Argentine would be back this weekend. Other than that, Chelsea do not have any injury issues.

The Spaniard is their first-choice keeper, meaning he keeps goal in every league game, barring any hiccups.

The captain came off the bench in Kiev and is expected to start on Sunday.

He played the full game in Ukraine and also remains the team’s first-choice centre-back. The German is in line to partner David Luiz at Goodison.

The Brazilian was an unused sub on Thursday and is expected to start on Sunday.

Emerson is now the left-back who is getting the nod in league games, partly why he was rested for the Europa League game. Expect the Brazilian to be the left-back on Sunday.

The Italian is Sarri’s system enforcer when it comes to playing possession football. He is in line to start against Everton.

The World Cup winner would start on the right-hand side of slightly advanced midfield, as he has done for most of this campaign.

Mateo Kovacic started and played the 90 minutes in Kiev, hence, in a selection toss-up, Barkley could his opportunity to play against his former club.

He came off the bench on Thursday, but the Spaniard is almost certain to start on Sunday.

Illness kept him out of any contention for the Europa League game, however, the Argentine would be back to lead the line against Everton.

The Belgian was an unused sub in Kiev and is certain to start at Goodison. 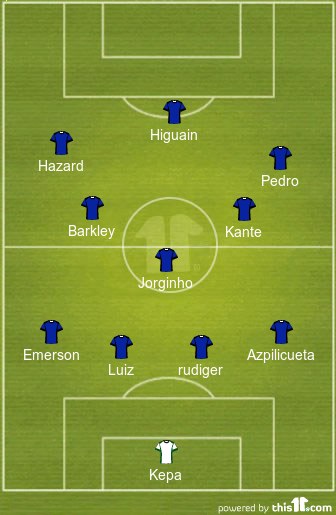