Chelsea will be aiming to be professional and complete the job in Ukraine when they face Dynamo Kyiv in the second leg of the Europa League last-16 stage.

The Blues won the first leg 3-0 at Stamford Bridge, leaving the Ukrainian opponents with very little chance to make a comeback even though they will have home support to back them up.

Chelsea’s league form hasn’t been great since the turn of the year, hence, they might have to go all the way in the Europa League if they are to play Champions League football next season.

Among the regulars, Chelsea not have any injury concerns. Marco van Ginkel has been a long-term absentee while Danny Drinkwater has an Achilles issue.

The world’s most expensive keeper is expected to be in goal as usual for Chelsea.

With Cesar Azpilicueta in line to get a rest for this game, Zappacosta should get a chance to replace him, just like in the first leg.

The youngster started the first leg and should be in the line-up for this game as well.

David Luiz featured in the first leg and played the league game, hence, Rudiger, who didn’t play the former, may get a game on Thursday.

The Spaniard wasn’t even in the 18-man squad against Wolves, with Emerson being selected over him in the league games. However, expect the former to start on Thursday.

Jorginho may get a rest with the Everton game in mind. Thus, we could see Ampadu in defensive midfield.

The Englishman should get a chance in this game ahead of Mateo Kovacic and N’Golo Kante. The latter duo can gear up to face the Toffees on Sunday.

He started the first leg and is expected to do the same in Ukraine.

This might be the game where we could see Hudson-Odoi being unleashed from the start.

With Gonzalo Higuain playing the league games, Giroud has become more of a Europa League lead man. The Frenchman is in line to start on Thursday.

Pedro and Eden Hazard may get a rest or be on the bench, keeping the weekend game in mind. Hence, Willian would get a chance to impress. 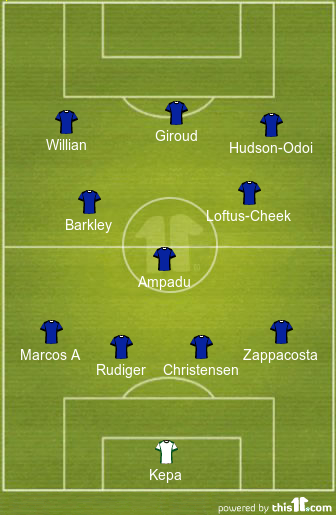