Chelsea play their third Champions League group game of the season on Wednesday when they travel to Amsterdam to take on Ajax.

The Blues are currently third in their Champions League group with one win from their opening two matches, while their Dutch opponents are top with two wins from as many games and two clean sheets to boot.

However, Frank Lampard’s Chelsea enter into this contest on the back of five consecutive wins in all competitions, with their latest victory coming over Newcastle at Stamford Bridge at the weekend.

N’Golo Kante suffered a groin problem with his national team that saw him miss the Newcastle game. He looks doubtful for the upcoming game.

Ross Barkley had turned his ankle on Saturday and is likely to miss out against Ajax. Andreas Christensen and Antonio Rudiger also remain out for now but Emerson might be fit enough for a spot on the bench at Amsterdam.

Kepa is Chelsea’s undisputed no.1 and he’ll keep his place in the team.

Azpilicueta’s performances have improved over the last few games. He is the skipper and will continue leading the team.

Zouma was decent against Newcastle, keeping the burly Joelinton at bay. However, he’ll have to be at his best to stop Ajax on Wednesday.

Partnering Zouma at the back will be Tomori, who has done so well since given a chance in the first-team.

Alonso scored the winner against Newcastle with a rasping left-footed drive. With Emerson touch and go for this game, the Spaniard is likely to keep his place in the team.

Jorginho has been one of the best players for Chelsea so far this season. His understanding of the game, positional awareness and distribution skills make him an asset to Lampard’s side.

With Kante and Barkley both struggling for fitness, the stage is set for Kovacic to get in and prove his worth to Lampard.

Mount has established himself as one of the mainstays under Lampard and there is no reason why he shouldn’t start at Ajax.

Willian has upped his game over the last month or so and deserves to start for the Blues against the Dutch giants.

Hudson-Odoi adds a lot of pace, energy and unpredictability to the Chelsea attack. The teenager will start on the left flank.

Abraham is Chelsea’s main man in attack and he’ll be hoping to get himself on the score sheet on Wednesday. 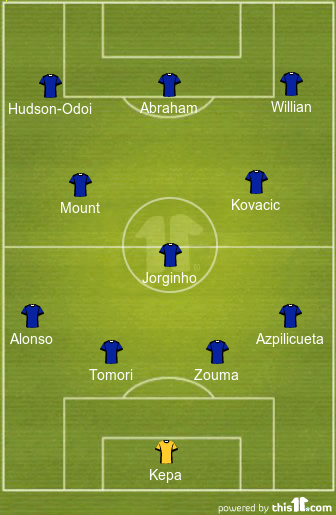