Predicted Aston Villa line-up to face Middlesbrough in the Championship

Aston Villa played out an enthralling 5-5 draw with Nottingham Forest in the Championship this mid-week. It was certainly an exciting game to watch from the neutral’s perspective but Dean Smith will be disappointed not to have picked up a win.

Villa now turn their attention to the weekend clash against Middlesbrough. The Villans travel to the Riverside to face third-placed Boro who also picked up a draw against Preston in mid-week. Dean Smith will definitely go for the win and expect his side to be strong at the back.

Didn’t have the best of outings last time out and has to do better against Middlesbrough. He will continue between the sticks.

Hutton has been in superb form over the last two weeks and should continue with similar momentum against Boro.

Wasn’t very defensively reliable in the last game but he will surely continue at the back for this one.

Chester has been an able partner to Tuanzebe at the back and will surely start this game alongside him.

Taylor has raided well down the flanks but he has to do more defensively and help his team out when needed.

McGinn looked lively down the flank and created lots of opportunities in the last game. He will continue on the right-hand side for this game as well.

Hourihane failed to defend properly against Nottingham Forest and needs to do better against a cohesive Boro midfield.

Received a start in the last game and did a lot of damage to the opposition. He will continue down the right wing against Boro.

Scored a whopping 4 goals against Nottingham Forest and will surely lead the line once again.

Read more: “Nyland is a disaster”, “We deserve to be in the PL”: Some Aston Villa fans in awe after 5-5 humdinger vs Nottingham Forest + Match report

Kodjia caused all sorts of problems with his pace and ability on the ball against Forest. Should start this game. 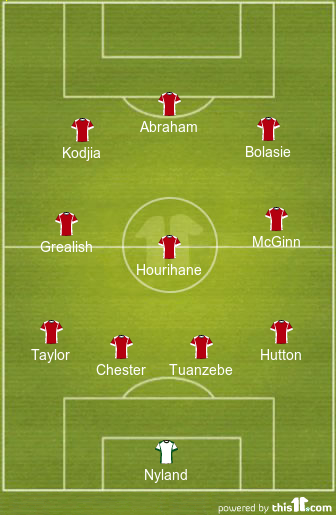