Arsenal travel to Old Trafford on Monday as Unai Emery aims to beat Manchester United in the Premier League.

The Gunners cruised to a 5-0 victory over Nottingham Forest in the Carabao Cup on Tuesday night. Emery fielded a lot of young players in their Carabao Cup third-round tie, which came only two days after his team had mounted a late comeback to beat Aston Villa 3-2 in the Premier League.

Regardless of their Monday evening’s opponents, Manchester United, not in their best of forms, Arsenal are certain to face a stiff test at Old Trafford.

Hector Bellerin and Kieran Tierney made their first appearances of the season in Tuesday’s Carabao Cup tie with Nottingham Forest.

Emile Smith Rowe was stretchered off in a nasty collision with Forest defender Jack Robinson and had to be taken off after being assessed by Arsenal’s medical staff for a lengthy period. So, he’ll be a doubt for the upcoming game.

Alexandre Lacazette is out with an ankle injury while Ainsley Maitland-Niles is suspended for the trip to Old Trafford after receiving a second yellow card against Aston Villa.

Leno is Arsenal’s undisputed no.1 and should start against Manchester United.

Chambers has performed extremely well in the last two games and deserves to keep his place in the team. With Maitland-Niles suspended, he’s likely to start at right-back.

Sokratis has had a shaky start to the season. He’ll have to be at the top of his game to help Arsenal keep a clean sheet at Old Trafford.

Luiz continues to blow hot and cold for the Gunners. He’ll be hoping to put a strong performance at the back against United.

With Monreal gone, Kolasinac has been Arsenal’s first-choice at left-back.

A defensive midfielder, Torreira would play an important role in nullifying United’s attacks.

A good distributor of the ball, Xhaka has been a regular fixture in Emery’s team and that won’t change on Monday.

Guendouzi was simply outstanding in Arsenal’s comeback victory over Aston Villa. The young Frenchman is a certainty to start at United.

Pepe grabbed his first goal in Arsenal colours against Aston Villa and will be keen to get on the score-sheet on Monday.

The youngster is brimming with confidence and could start on the left flank ahead of Reiss Nelson.

With six goals in as many league games, Aubameyang is in red-hot form at the moment and will fancy his chances against an unsteady United side. 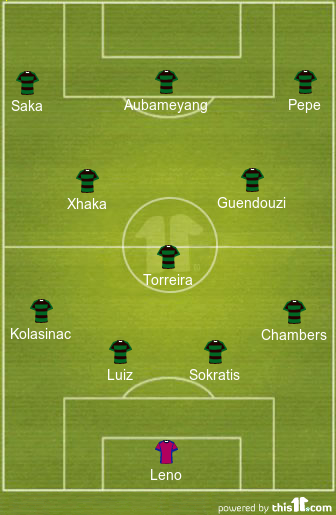