Arsenal will be aiming to make a strong comeback in the last-16 tie of the Europa League against French side Rennes at the Emirates. The Gunners were humbled 3-1 in France, leaving them in a difficult position to qualify for the next round.

Unai Emery’s men responded to that first leg defeat with a pretty impressive win against rivals Manchester United. Hence, the confidence level must have risen, and that should help them conjure a European revival.

Henrikh Mkhitaryan had a back injury that forced him to miss the United game. It will be touch and go for him on Thursday. Sokratis Papastathopoulos got sent off in the first leg and will miss this game.

Alexandre Lacazette’s suspension has been reduced after UEFA upheld Arsenal’s appeal and he is now available for selection.

He is Arsenal’s Europa League goalkeeper and should continue to be in goal on Thursday.

The youngster was superb against United and should get his chance at right-back against Rennes.

With Sokratis out, expect Mustafi to slot in central defence alongside Laurent Koscielny.

The captain will be aiming to help the team keep a clean sheet, to make the job slightly less tougher.

Since Arsenal are expected to be on the chasing expedition, an attack-minded full-back in the shape of Kolasinac wouldn’t be a bad idea.

He has been suspended for the league games, however, the Uruguayan remains a key player in the midfield.

The Swiss international has been in great form of late and scored against United. He probably is one of the first names on the team sheet these days.

With Torreira and Xhaka behind, Ramsey could get more freedom to move forward and play combination football with the front-line players.

With Mkhitaryan a doubt, Ozil might start on the right flank, drifting in to support the attacks.

The Frenchman’s availability should come as a huge boost to Unai Emery as he has been in terrific form this season. With goals being the necessity on the day, Lacazette could be of huge help to the Gunners.

The Gabonese international has been short on confidence of late but scoring against United would be of massive help going into this game. 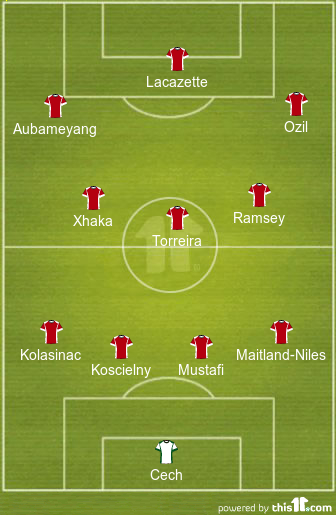