Tottenham Hotspur were made to toil against West Ham United as they eventually came out on top by beating the Hammers 1-0 at the London Stadium. Spurs have reacted well to a number of injuries in their squad and have yet managed to pick up important wins.

Mauricio Pochettinno’s side now come up against PSV Eindhoven in the Champions League. This game will pose an easier test as compared to Barcelona and the Lilywhites will be aiming to pick up a win in order to book their place in the knockout phase.

Mauricio Pochettino has been boosted by the return of Christian Eriksen who came off the bench against West Ham United. Mousa Dembele and Serge Aurier should also be fit for this game after appearing on the bench against the Hammers. Jan Vertonghen is still out injured, alongside Dele Alli.

The Frenchman put it an improved performance against West Ham United after coming under increased scrutiny over the last few weeks.

The former PSG defender should take the place of Kieran Trippier, giving the English defender some much-needed rest.

Sanchez looked sloppy in the last game but he will nevertheless return to the line-up for this match with Jan Vertonghen still out injured.

The Belgian has been a rock at the back for Spurs this season and will definitely start this game as well.

Davies will continue at left-back with Rose still out injured.

Sissoko showed a new side to his game against West Ham United and must now aim to maintain good form.

Dembele is back and fit. He should deputise in the middle of the park and aim to keep PSV at bay.

Winks has been very good with his crisp distribution and passing in the middle of the park.

Lamela is now proving to be a massive player for the Lilywhites this season. He really has stepped up his fitness and performances.

The Dane should return to the fold for this game and look to dictate the play, sitting behind Harry Kane.

Read more: 7 goals, 4 assists – Tottenham must land Arsenal a real blow by snatching away this Ligue 1 sensation in January

Kane seems to struggle without Dele Alli and Eriksen by his side, but this game should see the striker get back on the scoresheet. 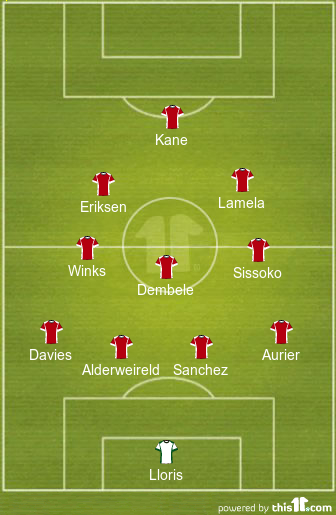