Manchester United will travel to face Partizan Belgrade in the Europa League on Thursday, aiming to get back to winning ways.

Ole Gunnar Solskjaer’s side impressed in a 1-1 draw with Liverpool at the weekend, ending their arch-rivals’ 17-game winning streak in the Premier League. However, they face a different task on Thursday in the form of breaking a winless run away from home, which now stretches to 11 games.

Ahead of the upcoming hectic schedule, the Red Devils boss will hope to have more players available when they make the trip to Serbia later this week.

Axel Tuanzebe had been due to feature against Liverpool, only to suffer a hip injury during the warm-up. The defender is still being assessed, but it looks unlikely he’ll be fit.

Nemanja Matic and Diogo Dalot will certainly miss the trip to Serbia, but chances of Jesse Lingard and Luke Shaw returning to the fold are high. Having missed the weekend’s clash with Liverpool, Paul Pogba is due to be assessed by the club’s medical staff this week. He remains touch and go for this game.

Romero is Man United’s goalkeeper in cup competitions and should start in goal on Thursday.

With Wan-Bissaka completing the entire 90 minutes against Liverpool after returning from tonsillitis and Dalot ruled out, Young could switch to right-back for this game.

Maguire has been good at the back but he’ll have to keep the in-form, towering Umar Sadiq at bay on Thursday.

Partnering Maguire at the back could be Rojo, who’ll need to keep things tight to stop the hosts from scoring.

Williams is an attacking full-back whose energy and overlapping runs will improve United’s potency going forward.

McTominay has done well so far in an otherwise disappointing season for the team. He is certain to start on Thursday.

Fred has been criticised for his performances this season but he produced a decent display against Liverpool at the weekend. The Brazilian should look to build on that performance.

Arguably had his best game in a United shirt against Liverpool this season. Pereira’s industry and energy would be required if the Red Devils are to win away from home on Thursday.

The experience of Mata in front of an intimidating Partizan crowd could be required for Solskjaer’s side.

Greenwood is a natural finisher and he’ll be looking to exploit spaces in behind the Partizan defence.

Martial returned from injury to make a cameo appearance against Liverpool at the weekend. The Frenchman could start at the expense of Rashford, who desperately needs a rest. 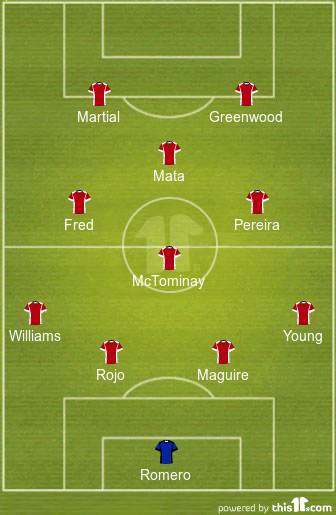