After last week’s disappointment at Cardiff, West Ham will be aiming to get back to winning ways when they face Huddersfield Town at the London Stadium.

The Hammers were below par in Wales, losing the game 2-0. If they are to keep their European hopes alive, a win this Saturday is the only way to go.

They are up against a bottom-placed Huddersfield team, who are all but relegated. However, no game in the Premier League is easy, hence, Manuel Pellegrini’s men must up their game and look for all three points.

Andriy Yarmolenko and Carlos Sanchez won’t be back this season. Jack Wilshere is still a bit away from first-team action. Fabian Balbuena has played a few minutes for the U23s and is recovering to full fitness.

Andy Carroll had some problem in his ankle, thus, he was left out of the Cardiff game. He could make the bench this weekend. Winston Reid is expected to be back by next month.

He is their first-choice keeper and is expected to be in goal against Huddersfield.

Ryan Fredericks had an ordinary game in Wales, hence, he could be replaced by the experienced Zabaleta for this game.

He played for the U23s last week and made good strides towards full recovery. Thus, expect to see the summer signing at the back against the Terriers.

He has done well but wasn’t at his best against Cardiff. Pellegrini would be hoping for more solidity and command from his centre-backs.

The Englishman was close to non-existent last week and must improve this weekend.

He was one of their best players in the defeat in Wales. The Englishman has played in defensive midfield and is expected to keep his place in that position.

The captain has been in good form in the past few weeks. His partnership with Rice in the midfield would help the Hammers.

Robert Snodgrass was ordinary at best in the last game and must be replaced by a pacy Antonio on the right wing.

He is slowly returning to full match fitness and would be hoping to contribute more in the creative sense.

The Brazilian had an off-day in Wales but he generally plays well at the London stadium. He would be looking to keep that form going.

It is now time for Pellegrini to let Arnautovic lead the line. Javier Hernandez was horrendous in the last game and should be benched. 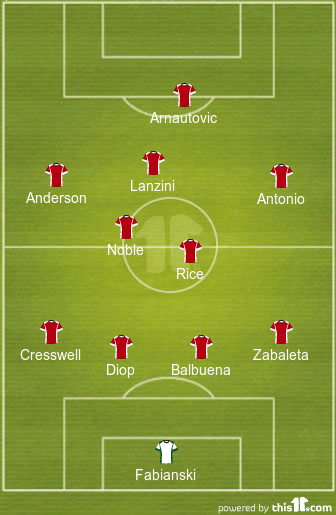