Tottenham welcome Olympiacos to the Tottenham Hotspur Stadium for their Champions League Group B clash on Tuesday.

Jose Mourinho’s tenure began with a long overdue away win as West Ham were beaten 3-2 on Saturday. The Portuguese will look to register a victory in the Champions League as well.

Spurs have seven points from their opening four games and trail group leaders Bayern Munich by five points. They can secure their place in the Champions League knockout stages with a win on Tuesday.

There remain question marks over Tanguy Ndombele’s fitness after a groin injury but he should make the squad on Tuesday. Ben Davies is a doubt after going off against West Ham with a muscular injury.

Jan Vertonghen and Erik Lamela’s respective injuries are expected to keep them out of the squad but should return for the Bournemouth game.

Gazzaniga has done well since replacing the injured Lloris in goal. He’ll look to keep a clean sheet on Tuesday.

Aurier had a decent outing against West Ham on Saturday and he’ll be hoping to build on that performance.

Alderweireld has been a mainstay for Tottenham this season and will be looking to keep the Olympiacos attackers at bay.

With Vertonghen injured, Sanchez has got a great chance to nail down his place in the team. He’ll be looking to impress Mourinho.

With Davies forced off against West Ham in the second half, Rose will start at left-back against Olympiacos.

Winks can carry the ball well and has a killer pass in his locker to split open defences. He should keep his place in the team.

Dier had a rusty game against West Ham where he misplaced few passes in the first half. The Englishman will look to improve under Mourinho.

Having scored in the 3-2 victory over West Ham, Son will be full of confidence when facing the Greek giants.

Alli showed signs of getting back his mojo on Saturday. He’ll be keen to replicate his performance in the upcoming Champions League game.

Moura repaid Mourinho’s faith with a solid performance against West Ham. The Brazilian will look to provide all kinds of problems to the Olympiacos defenders on Tuesday.

Kane is Spurs’ chief source of goals and should lead the attack. 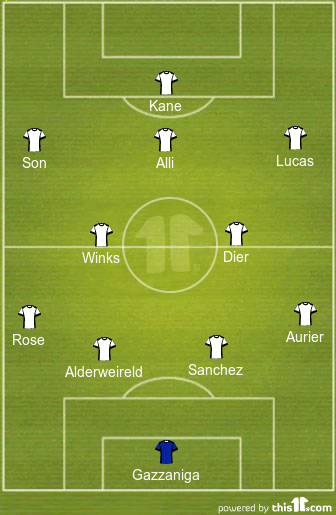