Tottenham welcome Manchester City at their new stadium for the first leg of the Champions League last-eight tie. This will be the first of three games in 10 day’s time between these two teams, with a second leg of this tie and a Premier League game at the Etihad coming up next week.

In terms of recent form, Spurs have struggled but gained some sort of confidence by beating Crystal Palace in their previous league game. However, they should fear the fact that City don’t look like losing a game of football and are sailing through every opponent.

On paper, over two legs, it is tough for Mauricio Pochettino’s men. Though that can be changed if they do well in the first leg, which is at home, and use that momentum going forward.

Serge Aurier and Erik Lamela are suffering from hamstring injury and have no return date. Eric Dier is recovering from his groin problem but won’t make it for this game. Fernando Llorente had a concussion issue, however, he will be okay to remain available for selection in the squad.

Even though there are mistakes in him, the French World Cup winner remains the first-choice keeper in the team and would start tomorrow.

Amidst Aurier’s continued absence, Trippier would be starting at right-back.

The Belgian international would be aiming to be strong at the back and help the defence keep the clean sheet.

He is one of the first names on the team sheet and is expected to be the case tomorrow.

Danny Rose has been doing well but Davies at left-back would provide more defensive cover before making a run forward.

The Englishman came back from injury and played a few minutes against Crystal Palace. He is fully fit now to start in central midfield tomorrow.

His finishing and final-ball quality may not be good, but the Frenchman’s work in middle of the park is important to this team. Hence, there is no one taking his place at the moment.

The Dane would be aiming to tuck in from the left-hand side, pick the telling passes in the final third and cause trouble to the Manchester City defence.

Alli thrives on the space in between the lines and he might get that when his team breaks quickly after City’s spell in possession. The Englishman should aim to support Kane up front by making those late runs in the box.

The South Korean is a livewire in the final third and Pep Guardiola’s men must be wary of him tomorrow night.

If Spurs are to keep their Champions League hopes alive, they would need Kane to take all the chances coming his way. 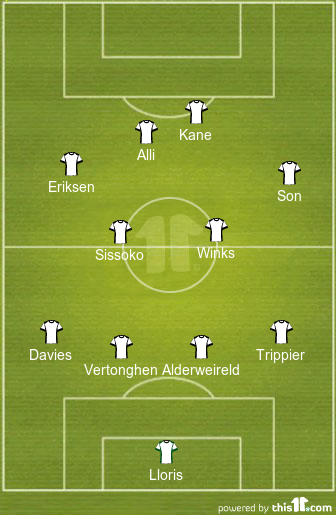