Predicted Tottenham line-up to face Everton in the Premier League

Tottenham Hotspur have been in good form in recent weeks after beating Burnley in the league last weekend and then routing Arsenal to qualify for the semifinals of the EFL Cup. They are very much on course to achieving a great season under Mauricio Pochettino.

But the manager will now turn his attention to this weekend’s clash against Everton in the league. The Toffees were beaten by Manchester City last weekend but they have otherwise been very impressive under Marco Silva.

Eric Dier, Jan Vertonghen, Mousa Dembele and Davinson Sanchez are all out injured and will be unavailable for this game. Spurs have done well despite suffering a number of injuries this season. Pochettino has to make do with the current crop of players given to him.

Lloris should make his way back into the squad for this game. His presence will be vital against the Toffees.

The right-back is a massive source of supply going forward. He will surely keep his place in this game.

The Belgian has been their backbone this season and has defended very well. Surely, he will continue to lead them from the back.

Foyth has returned from injury and was on the bench against the Gunners. He will start this one alongside Alderweireld.

Davies should shift back to the left flank with Foyth coming back from injury. The wing-back has done well in central defence recently.

Sissoko is the midfield engine at the moment as his work rate has been very fruitful for Tottenham this season. He will continue in central midfield.

Winks’ quick distribution and seamless switching of play have made him look very good this season. He should keep his place in central midfield as well.

Lamela could return to the line-up in place of Lucas Moura for this game. The Argentine has done well this season whenever called upon.

Eriksen will dictate the play and pick the passes in the final third. He will surely start this game.

Alli scored a stylish goal against the Gunners and will surely continue to start. He is a pest for the defenders to deal with.

Kane came on against Arsenal and immediately picked up an assist. He has been in good form in recent weeks but needs to score more given his high standards. 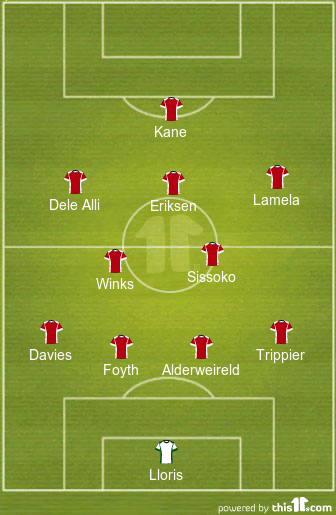