League leaders Swansea City welcome Nottingham Forest at the Liberty Stadium on Saturday as they look to make it five wins in a row.

The Swans have enjoyed a sensational start under Steve Cooper and as currently unbeaten in the Championship with five wins and a draw. They come into Saturday’s contest on the back off a morale-boosting victory over promotion rivals Leeds United.

Nottingham Forest, on the other hand, have enjoyed a mixed start to the season and will travel to south Wales to hand Swansea City their first defeat of the campaign.

Nathan Dyer has missed the last three league games with a knee problem and remains doubtful for the upcoming fixture. Aldo Kalulu is also out injured for Swansea.

Woodman is the club’s number one now and would be in goal for the game on Saturday.

Roberts has nailed down his place in the team at right-back. He should start against Nottingham Forest.

A leader and a fantastic organiser of the backline, Van der Hoorn is a certain starter at home this weekend.

The new signing has slotted seamlessly in Cooper’s side and should keep his place at left-back.

Fulton is a solid midfielder who has done very well for the Swans so far this season. He must start on Saturday.

Grimes will need to keep things tight in midfield and try avoiding cheap fouls in his team’s half. He should partner Fulton in the engine room.

Ayew brings a lot of pace, power and directness to the Swansea attack. He is expected to start on the right against Forest.

Dhanda couldn’t influence proceedings against Leeds in the last game. However, he’ll look to improve this time around and help his team to another three points.

Bersant Celina will provide support to the attack from the left flank.

With five goals in six appearances so far this season, Baston is the story of the season so far for the Welsh side. The Spaniard will lead the attack at the weekend. 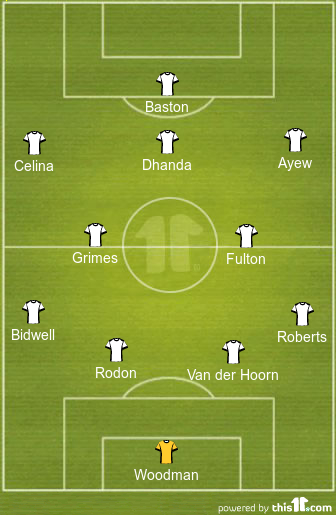