Swansea City face a visit to Bristol City on Saturday, with Steve Cooper keen to bounce back to winning ways in the Championship.

The Swans’ good start to the season was undone last weekend as Nottingham Forest rolled into the Liberty Stadium and snatched a 1-0 win. A late strike from Alfa Semedo was enough for Sabri Lamouchi’s men to come away from the game with all three points.

Cooper will hope his boys perform well and get a win against Bristol City, who are fourth in the Championship table.

For the trip to Bristol, Cooper will once again have to do without summer signing Aldo Kalulu.

Woodman is the club’s number one now and would be in goal for Saturday’s game.

An attacking full-back, Roberts enjoys going forward and putting crosses in the box for his teammates.

Van der Hoorn is Swansea’s defensive lynchpin. He is expected to start at Bristol.

Rodon will continue partnering Van der Hoorn in central defence. They’ll look to keep a clean sheet this time around.

Bidwell has done well since signing for the club this summer and should keep his place at left-back.

Fulton is a busy player in the midfield for the Swans. He will retain his place in the team.

Grimes should partner Fulton in the engine room and look to disrupt Bristol’s attacks at the weekend.

Ayew is an experienced player who brings a lot of pace and directness to Cooper’s attack. He is expected to start on the right flank against Bristol.

Celina failed to make an impact in the defeat against Nottingham Forest last weekend. However, the ex-Manchester City academy starlet could get a chance to showcase his talent at Ashton Gate.

Routledge has volumes of experience under his banner and knows exactly what it takes to thrive at this particular level. So, he could start again for the Welsh side.

Baston has been fantastic for Swansea City so far this season. He is the team’s chief source of goals and is likely to lead the attack again at the weekend. 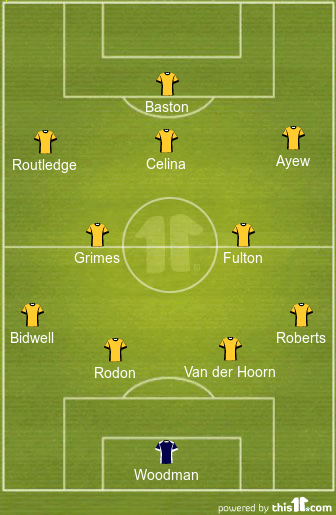