Championship leaders Norwich City will be aiming to keep their winning run going when they face Swansea City at Carrow Road this Friday night. The Canaries got the better of Millwall last week away from home, maintaining their two-point lead at the top of the standings.

Daniel Farke’s men are up against a Swansea side who are 14th in the table and not in the greatest of forms. The Welsh side are seven points behind in the race to finish in the top-six, hence, every game is a virtual must-win for them.

Louis Thompson will come back from his knee injury by April. Other than that, Farke has a fit squad to pick his eleven from.

The Dutchman is their first-choice keeper and is in line to start on Friday.

He has had a terrific season at right-back and should continue to keep his place in the team.

The German has been a rock solid presence in the middle of the Norwich defence. Scored against Millwall and is a certain starter on Friday.

The youngster was impressive in the previous game and is growing as a player week in week out. He should partner Zimmermann against Swansea.

He is the Canaries’ undisputed number one left-back and continues to impress game after game. The 21-year-old would be aiming to make runs forward and cause trouble to the Swansea defenders.

The German has shown energy and desire to impact games from the defensive midfield position. He is good at shielding the back-line and passing the ball out from the back. He is expected to keep his place for this game.

Tettey is back from injury and was on the bench last week. Expect the Norwegian to be back in the eleven on Friday.

The Argentine star provided two assists against Millwall and was a real threat. Swansea defenders would be vary of him on Friday.

Scored a goal last week and is a real threat to the defenders, operating in between the lines behind the striker.

The 26-year-old is a bundle of energy down the left-hand side and is a key part of this Norwich setup. He is expected to take the field against Swansea.

The striker scored his 24th league goal of the season against Millwall as he continued his rich vein of form. He is a proper superstar who is leading this Norwich team to greater heights. 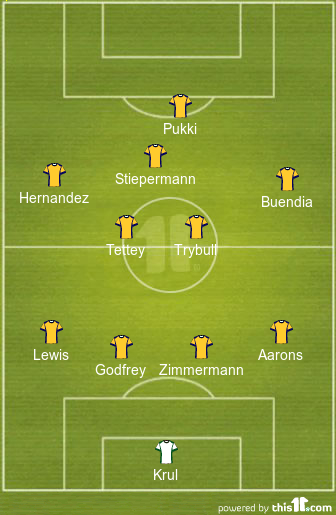