Norwich City welcome Frank Lampard’s Chelsea at Carrow Road on Saturday in a bid to win back-to-back games in the Premier League.

The Canaries will be buoyed by claiming their first win of the season since returning to the Premier League, with Daniel Farke’s side winning 3-1 against Newcastle United at home. Teemu Pukki netted a hat-trick in the win for the Norfolk club, making it four goals from two games so far this season for the 29-year-old.

Their opponents at the weekend, Chelsea, have taken just a point from the opening two games and come into this fixture off a 1-1 draw with Leicester City.

Josip Drmic missed the last game against Newcastle due to a thigh injury and remains doubtful. Onel Hernandez has had a knee surgery and that should keep him out for some time now, while Timm Klose and Christoph Zimmermann could miss out again.

Jamal Lewis was forced off with a hamstring injury in the final minutes of last game but he’ll be fit to face Chelsea.

Krul is Norwich’s undisputed first-choice in goal and he’ll start against Chelsea as well.

Aarons is a modern-day right-back, who loves to venture forward and contribute as much as he can to Norwich’s attacks.

Hanley hasn’t had the best of starts for the Canaries in the Premier League. He’ll be keen to produce a solid performance at the back against Chelsea.

Godfrey is a promising young defender who will aim to keep the Chelsea attackers at bay.

Lewis is a rampaging left-back who is diligent defensively and equally good going forward.

Trybull brings balance to the midfield and is likely to keep his place in Farke’s starting XI.

A solid midfielder who can dictate the tempo of the game with his passing, Leitner should start next to Trybull against Lampard’s side.

Cantwell had a superb game in the 3-1 victory over Newcastle last time out. He is expected to start on the right wing again.

A sweet striker of the ball, Stiepermann offers creativity to this Norwich team. He is likely to start on Saturday.

Buendia will run around and cause as much fuss as possible in and around the Chelsea box.

Pukki has enjoyed a brilliant start to the Premier League campaign, scoring four goals in two goals. He will spearhead the Canaries’ attack. 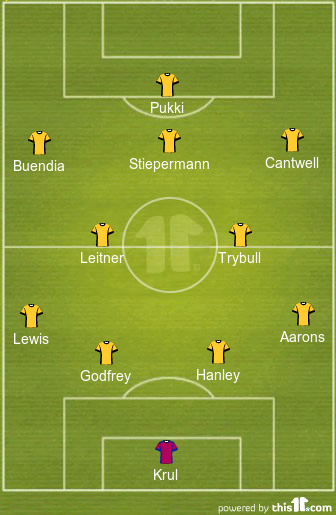