Newcastle United have been in fine form in the past few weeks and would look to keep their momentum going when they face Wolves at St.James’ Park this Sunday. Rafa Benitez’s men dug in deep to get a precious point against Everton away at Goodison Park. That result means the Magpies have taken 10 points from their previous five games, a team certainly on the up at the moment.

This weekend, they are up against a Wolves side who came from behind to beat Chelsea on Wednesday. Hence, the Old Gold will be a confident bunch coming into this game.

Kenedy has a toe injury which kept him out of the Everton game. He is a doubt for this weekend too. Paul Dummett will return to training by Friday, however, the Sunday game might come too early for him. Isaac Hayden has a knock.

The goalkeeper again came up with a few fantastic saves to help Newcastle earn a point against Everton. He is a vital player in the team.

After defending for most of the game against the Toffees, the American would be looking to make forward runs on a regular basis versus Wolves.

The captain is key at the heart of defence. His security and authority helps the team in a massive way.

The Argentine has been a brilliant addition to the squad. His last-ditch tackle on Gylfi Sigurdsson summed up his desire to not get beaten easily.

He is expected to get more freedom to make runs at the other end of the pitch compared to Wednesday.

Another good addition to the Newcastle squad. The South Korean brings calmness and assured quality in central midfield.

He is an ever-present figure in the midfield for the Magpies. His work rate is so helpful to the team.

Expect him to get back into the line-up as a number 10 playing behind the striker.

He was suspended for the previous game but we should see him in action on Sunday.

With Kenedy an injury doubt, we may see Murphy continue to play on the left wing. The latter produced a good cross for Salomon Rondon to score against Everton.

Read More: Why Newcastle should sign €30m target’s teammate in January instead of the target himself

The Venezuelan has been a proper number nine for Newcastle. Scored a well-taken goal against the Toffees and looks a real threat from crosses. 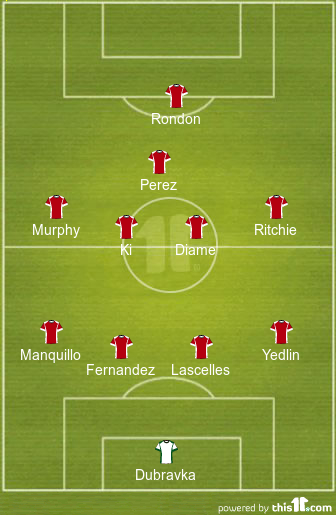