Newcastle United meet Bournemouth this Saturday with an aim to continue their positive form after claiming their first win last week. Rafa Benitez’s men got the better of Watford at St.James’ Park to move out of the drop zone on goal difference. They now face a tough challenge against a talented Cherries side who currently lie sixth in the table, just four points behind fourth-placed Tottenham.

The Magpies would be hoping to make their home advantage count for this game and get another win to get clear of the relegation fears before the last international break of 2018. However, it ain’t that easy as it looks. Eddie Howe’s men have been terrific this season and they will pose a stern challenge on the day. Benitez and his men should be ready for that.

Jonjo Shelvey, Yoshinori Muto and Jamaal Lascelles suffered injuries against Watford last week, however, the Japanese seems to be making good progress. Ciaran Clark is back in training if required, and Florian Lejeune is out for long term.

Imagining a Newcastle team without Dubravka would be like visualising a calamity. Such has been the impact of the Czech in goal.

The American is been defensively solid this season, the fans would be hoping for on the other side of the pitch on Saturday.

If Lascelles takes time to recover, we may see Schar in action in central defence for the Magpies.

The summer signing has been in decent form. Certainly a good addition to the squad, especially after a long-term loss of Lejeune.

The Welshman is a defensively solid left-back, however, a bit more adventure on the other side of the pitch would be an added bonus.

Diame is a solid presence in central midfield, doing the simple things and ticking the team over.

With Shelvey expected to be out, Ki should get a chance for this game, especially after last week’s match-winning assist for Ayoze Perez.

Ritchie’s crosses need to improve a bit to add more threat to the attacks. His left foot is delicious and should put in more devilish balls into the box.

The loanee from Chelsea has been in and out of form this season. Benitez would be hoping for more consistency.

After a stuttering start to the season, Perez scored the match-winning goal coming off the bench last week. It should increase his confidence for this game.

Read More: Given Newcastle’s goal-scoring woes, this 5ft 8in Belgian speed dribbler would be an excellent signing

The striker returned from injury and has looked a bit rusty. The Magpies should give him better service though, especially from crosses in wide areas. 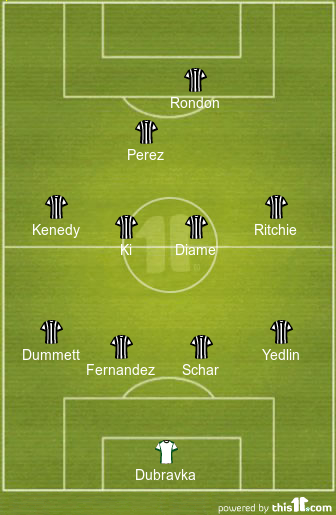