Manchester United travel to the Emirates to take on Arsenal on Wednesday, hoping to make it three wins on a bounce in the Premier League.

The Red Devils defeated Burnley 2-0 at Turf Moor on Saturday, with Anthony Martial and Marcus Rashford getting on the score sheet. Consecutive victories over Newcastle United and Burnley means Ole Gunnar Solskjaer’s side have overcome the disappointment they suffered at Watford.

Arsenal, meanwhile, are reeling from a disappointing defeat to Chelsea on Sunday, when late goals from Jorginho and Tammy Abraham stole all three points.

Paul Pogba missed the win over Burnley as he had a reaction after the Newcastle game on Saturday. However, the Frenchman is expected to be fit for the trip to Arsenal.

But Solskjaer will be without Scott McTominay, Eric Bailly, Timothy Fosu-Mensah, Axel Tuanzebe and Marcos Rojo.

De Gea kept the first clean sheet on Saturday after September. That should give him a lot of confidence ahead of the Arsenal game.

One of United’s best performers this season, Wan-Bissaka was rested against Burnley. So, he’ll be fresh to face the Gunners on Wednesday.

The Swede had an excellent game at Turf Moor and will look to build on that performance against Arsenal.

Alongside Lindelof, Maguire was solid at the back against Sean Dyche’s men and helped Manchester United keep a much-needed clean sheet. He’s a certainty to start on Wednesday.

Even though Brandon Williams had an excellent game at Burnley, Shaw is expected to come back into the fold and at left-back.

United’s most reliable midfielder at the moment, Fred has grown leaps and bounds in the last couple of months. The Brazilian is an undoubted starter at the Emirates.

Matic also had a solid game against Burnley, dictating play from the midfield alongside Fred. With Pogba likely to make the bench, the Serb will start again.

Greenwood is a sublime talent who is enjoying his breakthrough campaign at Old Trafford. The teenager will start on the right at the expense of James, who was excellent in the 2-0 victory over Burnley.

Pereira assisted Martial’s goal at Turf Moor and had a really good game overall. He’ll start in the no.10 role.

The red-hot Rashford wrapped all three points on Saturday by scoring in the stoppage time. He’s one of the first names on Solskjaer’s team sheet.

With three goals in the last two games, Martial is looking the real deal as United’s number nine. The Frenchman will lead the attack against the Gunners as well. 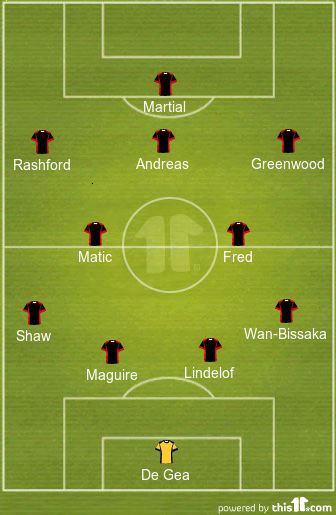