Manchester United welcome Crystal Palace at Old Trafford as they looked to bounce back to winning ways on Saturday.

The Red Devils were unfortunate not to maintain their winning start to the season, as they were held 1-1 by Wolves in an entertaining Monday night clash at Molineux. Paul Pogba missed a penalty after Anthony Martial continued his superb form in front of goal to open Ole Gunner Solskjaer side’s scoring.

They’ll be keen to get all three points against a struggling Crystal Palace side, who head into Saturday’s contest off the back of a 1-0 defeat to Sheffield United.

Eric Bailly and Timothy Fosu-Mensah are the only players out injured for Manchester United.

David De Gea couldn’t keep a clean sheet at Molineux as he was beaten all ends up by a fantastic long-range strike from Neves. However, the Spaniard will be keen to quickly shut the shop on Saturday.

Aaron Wan-Bissaka has been excellent in the two games thus far, impressing with his tackling and energetic displays down the right.

Lindelof was solid last season and has looked even better alongside Harry Maguire in United’s central defence.

An imposing figure and a real leader at the back, Maguire will look to keep Benteke quiet at the weekend.

Shaw has been decent in the first two games of the season but he’ll need to improve to match the standards of his fellow defenders.

Scott McTominay struggled to impose himself against Wolves. He’ll look to bounce back with a strong performance at the weekend.

Paul Pogba missed the spot-kick at the Molineux that cost Manchester United three points on Monday. However, the Frenchman will look to redeem himself by putting in a big performance against Palace.

Jesse Lingard is crucial to United’s pressing under Solskjaer, but he’ll need to produce more quality in the final third.

Considering Palace’s tactics of sitting deep and hitting on the counter, Solskjaer could go with the creative Mata in the no.10 role.

Rashford has looked solid in the first two games of the season, scoring two goals. He’ll be keen to get on the score-sheet at the weekend.

Martial scored a fantastic goal in the 1-1 draw with Wolves on Monday. With no.9 on his back, the Frenchman is doing what he does best, i.e. score goals for the Red Devils. 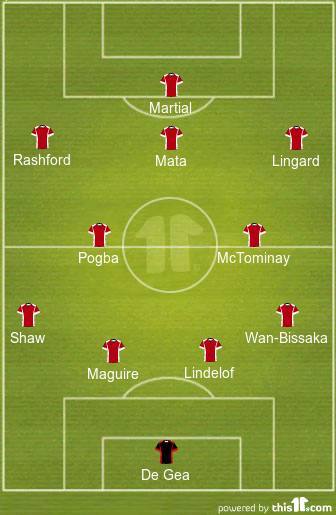