Manchester United will travel to the King Power Stadium to face Leicester City as Ole Gunnar Solskjaer hopes to bounce back to winning ways on Sunday.

Solskjaer’s winning run as Manchester United’s caretaker manager came to an end on Tuesday after his team drew 2-2 with Burnley at Old Trafford. However, the Norwegian would have been proud with the way his team came back from 2-0 down to salvage a point in stoppage time.

Leicester City, meanwhile, will head into Sunday’s fixture on a high following their 1-1 draw at Liverpool.

Anthony Martial missed the Burnley game due to injury but could return to the squad to face Leicester. Paul Pogba remains a doubt for the trip to the King Power Stadium after he picked up an injury against Burnley.

De Gea is United’s undisputed No.1 in goal and he will be hoping to keep a clean sheet on Sunday.

Young has been impressive under Solskjaer, dishing out consistent performances at right-back.

Lindelof scored a stoppage-time equaliser to complete United’s comeback against Burnley in midweek. He is playing at the top of his form and will keep his place in the team.

Partnering Lindelof at the back would be Jones, who’ll have to be at his best to stop Jamie Vardy and co. at the weekend.

Shaw has made the left-back position his own this season. He is a certain starter against the Foxes.

Matic has been so vital for Manchester United under Solskjaer as his presence in the engine room gives the flair players the freedom to express themselves.

Herrera was rested in the midweek against Burnley and is likely to be recalled into the Manchester United starting XI at Leicester.

With Martial a doubt, Solskjaer could hand Alexis Sanchez a start on the left. The Chilean would be desperate to make a mark and guide United to all three points on Sunday.

Pogba remains doubtful for Sunday’s game after he picked up an injury against Burnley. For the No.10 role, Lingard could get the nod ahead of Mata.

Lukaku could start on the right wing and give United’s attack a different dimension against Leicester.

Read more: Man United handing a new deal to their out of contract £36m star is an absolute no-brainer – agreed?

Rashford will be desperate to get on the score-sheet as Manchester United look to tame the Foxes at the King Power Stadium. 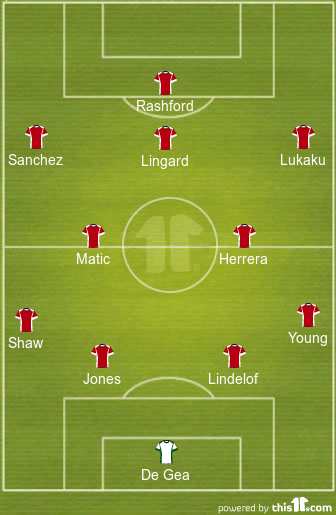