Predicted Liverpool line-up to face Leicester in the Premier League

League leaders Liverpool will resume their league campaign with a potentially tricky home game against a mid-table Leicester City at Anfield on Wednesday night. Jurgen Klopp’s men have had an 11-day break after their win over Crystal Palace, as they weren’t involved in the cup competitions.

Hence, they must have got an adequate amount of rest going into this game and the challenges ahead. The Reds are up against a Foxes side who can beat anyone on their day. We cannot forget the fact that Claude Puel’s men were the last team to beat Manchester City, that was on Boxing Day. Thus, it is going to be a good game on Wednesday.

Alex Oxlade-Chamberlain is recovering well from his long-term injury and could be back in action by early March. Joe Gomez is still a week or two away from full training, while Trent Alexander-Arnold is making a good recovery.

James Milner got a red card against Palace and is suspended. Georginio Wijnaldum is expected to be back in action for this game. Fabinho is back fit and should be able to start this game.

The Brazilian has started every league game and should continue to do so.

With Gomez and Milner out, and Trent a big doubt, we may see Fabinho at right-back for this game.

He has recovered from his injury and started against Palace. Expect him to do the same on Wednesday.

The Dutchman has been a colossus at the back, keeping the defence together and helping the team to be solid. He is an irreplaceable player.

The Scot is just fantastic in the way he runs up and down the pitch and impact games on both sides of the field. He is expected to keep his place at left-back.

The captain is a sure-starter for this game, partly because he has done well in the past couple of games and partly due to injury problems to other players.

The Dutchman missed the Palace game as Klopp didn’t want to risk him. The player is expected to start this game.

He has done well on the right-hand side of the attack whenever the opportunity has been given. The Swiss maestro should start as it is a home game against a possible deep-defending team.

With Mohamed Salah leading the line in most games this season, we have seen Firmino playing in a withdrawn role between the lines. Should be the case again.

The Senegalese star is better off playing on the left rather than switching to the right. He is expected to start in his favoured position.

Read More: Liverpool beating Man United to sign this £25m prodigy would be another important bargain buy by Klopp

The Egyptian has been in fantastic form in the past couple of months, especially at Anfield. He will be aiming to keep that going. 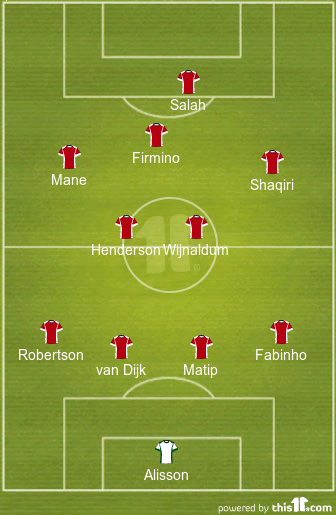