Leicester City were held to a 0-0 draw against Burnley in the Premier League last time out as Claude Puel’s side were made to rue a number of missed chances on the night. It’s been a couple of emotional weeks for the Foxes but they will definitely return stronger against Brighton and Hove Albion this weekend.

The former Premier League champions travel to the Amex stadium, a place where the Seagulls have looked solid at the back. Claude Puel’s men have to find the goals in order to pick up the points.

Long-term absentee Matty James is still out for a while. Harry Maguire, James Maddison and Daniel Amartey will also be unavailable for this game through subsequent injuries in recent weeks. Claude Puel will have to make do with his current crop of players.

The Dane will certainly keep his place between the sticks, and there’s no question about that.

Pereira will continue to raid down the right flank and create opportunities in the final third.

The captain will start this game given that Harry Maguire is still unavailable through injury. He defended his heart out in the last game.

Evans will continue to partner Morgan at the back with the pair looking good together in the last game.

Chilwell has certainly stepped up his performances this season and has looked very lively going forward as well.

His work rate has been good and he will need to keep it up in this game as well.

Ndidi will have his work cut out for him against the Seagulls as they aim to dominate the midfield.

Albrighton’s inswinging crosses will be dangerous for the likes of Shane Duffy and Lewis Dunk to deal with.

Though he hasn’t taken the league by storm, Ghezzal is still a threat in the middle.

Always running, and always causes problems for defenders in the final third. Expect Gray to get amongst the goals.

Read more: 8 goals, 2 assists – This jet-heeled Preston winger would be a perfect fit for Leicester City

Vardy has looked slightly off the pace in the last few weeks but one goal will be enough for the English striker to regain his confidence in front of the goal. 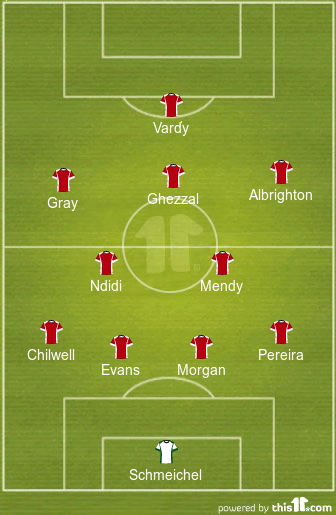