Leicester City will welcome Crystal Palace to the King Power Stadium on Saturday as Claude Puel looks to get back on winning track.

The Foxes are winless in the last five Premier League games, which has put Puel under enormous pressure. Puel, known for calm demeanor, will be desperate to beat the Eagles and ease some pressure off his shoulders.

Crystal Palace, meanwhile, come into Saturday’s game after booking a place in the FA Cup quarter-finals by beating Doncaster 2-0.

Marc Albrighton and Daniel Amartey have already been ruled out for the season.

Puel has no fresh injury concerns ahead of the game.

Schmeichel is Leicester’s undisputed no.1 in goal and he’ll start against Palace.

Pereira is an attacking full-back who loves to bomb forward and put crosses into the box.

Evans is an experienced defender who’ll have to be at the top of his game to keep the Palace attackers at bay.

A ball-playing centre-half, Maguire has grown leaps and bounds in the last couple of years. He is a certain starter for the weekend’s game.

Chilwell is an exciting left-back who makes use of every opportunity to go forward and contribute to the team’s attacks.

Tielemans is a highly-rated midfielder known for his dribbling skills and creativity. The Belgian will look to provide more creativity in Leicester’s engine room at the weekend.

Ndidi excels in breaking the opposition’s play and keeps the Foxes ticking. He is a certain starter alongside Tielemans in central midfield on Saturday.

Maddison has enjoyed a fantastic debut season with Leicester, showcasing his skill, creativity and vision. Due to his energy and creativity, he has become an indispensable figure for Puel’s Foxes.

With pace to burn, an impressive range of passing and the ability to get into promising scoring positions, Barnes has quickly become a regular after returning from his loan spell.

Another pacey customer, Gray will look to give the Palace defenders a torrid time at home on Saturday.

Vardy hasn’t been at his lethal best this term but he remains a crucial member of the Foxes’ set-up. He could be recalled into the starting XI to lead the team’s attack. 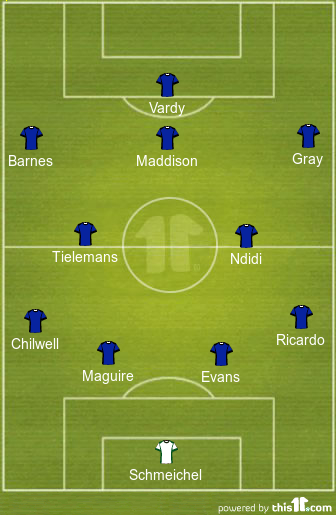