Leicester City were beaten by Crystal Palace in the league last weekend as the Foxes continued their mixed run of fortunes. Claude Puel has been unable to maintain consistency in the team’s displays but the manager will be hoping for a set of positive results in the festive period.

Leicester come up against Chelsea in the Premier League this weekend. The Blues are on the back of a win against Brighton and are very confident after beating champions Manchester City two weeks ago.

Daniel Amartey, Ben Chilwell and Matty James are the only absentees for the Foxes. Apart from that Claude Puel has no real injury concerns in his squad. He can deploy his strongest side against the Blues.

Schmeichel will definitely keep his place in the line-up for this game. The Dane has been massive between the sticks.

The new signing has been very fruitful going forward on the right flank. He will surely keep his place in the side.

The captain will continue at the back after showing improved form in recent times.

Maguire has been a vital cog at the back for the Foxes this season. The England centre-back will partner Morgan for this clash as well.

Fuchs will keep his place with Ben Chilwell still out injured. He is good at raiding down the flanks.

Mendy needs to be more defensively aware and aggressive. Teams have easily been getting past him over the last few weeks.

Ndidi’s work rate has been brilliant over the last few games. He will continue on the left side of central midfield.

Albrighton’s devilish deliveries into the box should cause all sorts of problems for the Blues. He will continue down the right.

Maddison has been a supreme creative force for the Foxes this season. He is their main source of supply.

Gray will cause all sorts of problems with his pace and trickery on the ball. He should be a pest for the Chelsea defenders.

Vardy will continue to lead the line for the Foxes. He needs to find his scoring form. 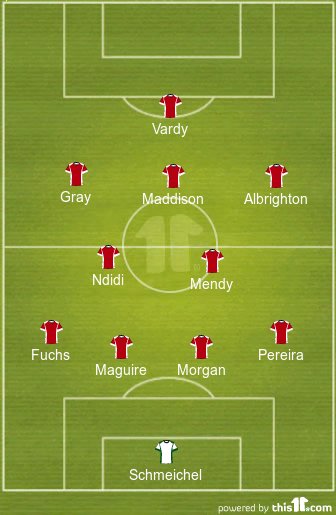