Fulham will be desperate to get a win under their belt when they face West Ham United at Craven Cottage this Saturday in the Premier League. Claudio Ranieri’s men were close to atrocious last week against Manchester United, losing the game 4-1. They stay at the foot of the table, three points behind the safety zone.

Things won’t come easy this weekend as the Hammers are in fine form at the moment, winning their previous three league games on the spin. Hence, the Cottagers need to come up with a special performance to topple their London opponents on Saturday.

Andre Anguissa got a red card against United and is suspended for this match. Floyd Ayite has a groin problem and is probably out for this match. Calum Chambers looks like will be ready to start this weekend, while Kevin McDonald has a hamstring strain and could remain out.

The Spaniard has done well but his defence hasn’t helped him at all. As a result, keeping a clean sheet continues to be a distant dream. He would be hoping for a chance on Saturday.

He was left out of the previous game and Fulham looked weak at right-back. Expect Christie to come back into the team.

He struggled at right-back against United, hence, he should return to his favoured centre-back position.

The summer signing needs to step up and lead that shabby defence to some sort of stability.

Bryan must concentrate on defending as a left-back before thinking of bombing forward on every occasion.

The loanee from Arsenal had an injury but he should be fit to start on Saturday.

The Ivorian must step up in the midfield to protect the back-line and also support the attack.

Fulham fans will be hoping the youngster’s pace causes trouble to the West Ham defenders in the wide areas.

The skipper has played decently but he is lacking the final product while operating behind the striker. He needs to improve on that.

The Cottagers would do well if Schurrle gets some goals and wins them important points.

Read More: Ranieri can fix Fulham’s leaky defence by signing £12.5m Liverpool outcast and it would be a steal

The Serb has a good record at home this season. He would be aiming to score at least once this weekend. 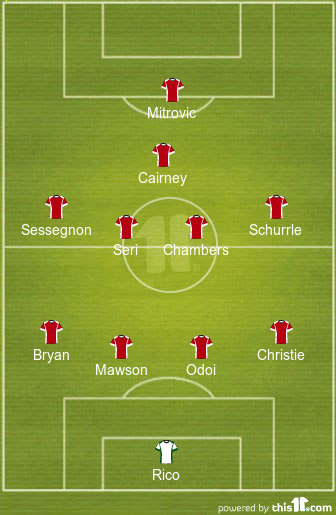