Everton return to Premier League action on Saturday when they host Pep Guardiola’s Manchester City at the Goodison Park.

Marco Silva’s side had slumped to back-to-back Premier League defeats at the weekend, losing 2-0 at home to Sheffield United, and there were murmurings of discontent around the club.

However, the Toffees won 2-0 at Sheffield Wednesday in the Carabao Cup on Tuesday to ease the pressure on Marco Silva, thanks to a Dominic Calvert-Lewin brace.

Silva will now hope to put a solid show against Manchester City, who are in blistering form at the moment and will come into this fixture as favourites.

Jean-Philippe Gbamin and Andre Gomes are the only players currently out injured for Everton.

Pickford continues to be an undisputed starter between the sticks for the Toffees.

Sidibe added a lot to Everton attacks against Sheffield Wednesday and deserves to start ahead of Coleman at right-back at the weekend.

Mina had scored an own goal in the 2-0 defeat to Sheffield United last weekend. After an assured display against Sheffield Wednesday, he’ll be hoping to build on.

Everton’s defence has looked shaky in the last few weeks and one of the reasons for it is the poor performances of Keane.

One of the best left-backs in the division, Digne is an undoubted starter against Man City.

Schneiderlin will have a big job of shielding the backline by breaking up the opposition’s attacks on Saturday. The Frenchman has to start without any second thoughts.

The experienced Delph will be up against his former employers on Saturday. He’ll be raring to prove a point.

With his pace, energy and movement, Richarlison will look to cause problems for the City defenders.

Iwobi produced a lively performance against Sheffield Wednesday in the Carabao Cup, impressing in the no.10 role behind Calvert-Lewin. The Nigerian could be handed a similar role against Guardiola’s side at the weekend.

The twinkle-toed Bernard is an intelligent player who likes to link play and create havoc in the opposition box. He’ll start on the left flank.

After a brace in the Carabao Cup tie with the Owls, Calvert-Lewin will be fancying his chances against a disjoined City backline. 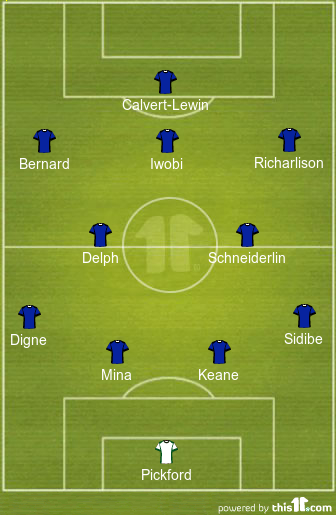