Everton were fortunate not to pick up a point against Liverpool who scored deep into stoppage time to hand the Toffees another Merseyside derby defeat. Marco Silva’s side have been really good this season and have conceded the least number of goals outside the top 5.

Silva now turns his attention to the home clash against Newcastle United in the Premier League this mid-week. The Magpies are on the back of a heavy defeat to West Ham United and are in need of a few positive results. Marco Silva will definitely set up his side in such a way that they go for the three points.

Only James McCarthy is out injured for the Toffees who have no other problems in the squad at the moment. Manager Marco Silva is expected to make a few changes in order to keep the squad fresh.

Did well in the Merseyside derby but some poor judgement made him pay on the night. He will nevertheless keep his place in the squad.

Coleman’s raids down the right flank will cause all sorts of problems for the Newcastle defence.

Keane has been an ever-present figure and very consistent at the back for the Toffees this season. He will keep his place.

The Frenchman will return to the line-up in place of Yerry Mina. Zouma has been an able partner to Keane at the back.

Digne has been a massive presence down the left flank for Everton since making the move this season. He will keep his place for this game.

Gomes’ arrival immediately eradicated the midfield woes for the Merseyside club. He should continue on the right-hand side of central midfield in this game.

His tackling and relentless running have been vital for the Toffees this season. No player has more successful tackles than Gueye in the league this season.

Walcott was brought off as an injury precaution and should be able to continue for this game.

Played all sorts of dangerous balls against Liverpool and was unfortunate not to pick up an assist.

The youngster should come into the side for Bernard. Calvert-Lewin has done well whenever he has been called upon this season.

Read more: Everton would strike gold if they splash the cash on this top-class £40m Ligue 1 star in January

The Brazilian was unable to find the back of the net against Liverpool but he might certainly do so against Newcastle United. 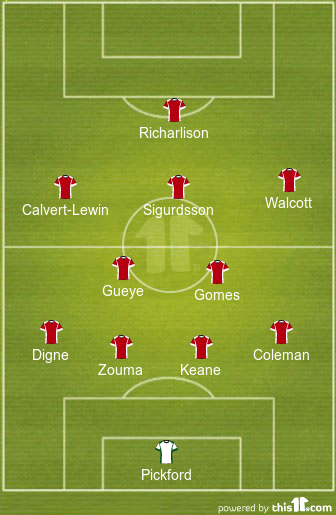