After delivering a meek performance at Fulham, Everton would be looking to right the wrongs when they face a struggling Manchester United at Goodison Park on Sunday.

Marco Silva’s men were on a high going into the game at Craven Cottage this past weekend but they disappointed themselves and lost the game 2-0.

However, the Toffees are back in home comforts, where they have a record in the past month and a half. In their previous three home games, they have beaten Chelsea and Arsenal, and took a point against Liverpool.

This Sunday, the Merseysiders will be up against a United side that just got schooled at Barcelona. Hence, expect a resurgence from the Red Devils. On paper, this looks quite an even encounter, with Everton slightly ahead when their recent home form is taken into account.

Yerry Mina is not expected to feature for the first-team this season. He is doing his recovery work, which would take some time.

Andre Gomes has been banned for three games after he accepted the FA charge for a stamp on Fulham striker Aleksandar Mitrovic. Morgan Schneiderlin is back in training. It is up to the manager to start him.

Coleman is slowly gaining some good form in the past few weeks. Expect him to start against United.

Phil Jagielka really struggled in the Fulham game and is certain to not start on Sunday. Keane is back fit and should slot into the XI.

He has been a consistent figure at the back for the Toffees. Expect him to partner Keane on Sunday.

The Frenchman is now the club’s number one left-back. His runs down the left flank and crossing into the box would be key against this United defence.

With Gomes banned and Schneiderlin returning to training last week, expect the latter to start in central midfield.

He is probably one of the first names on the teamsheet.

He was the only good player for Everton against Fulham. The Brazilian has certainly done nothing wrong to be dropped to the bench.

The Icelander was uninspiring on Saturday. Everton would be hoping for more against United.

The Brazilian has done well since the turn of the year, except the last game. He is still a good player and should start on Sunday.

In a game where the opposition is expected to have more of the ball, Calvert-Lewin could be a dangerous centre-forward on the counter. The youngster should lead the line on Sunday. 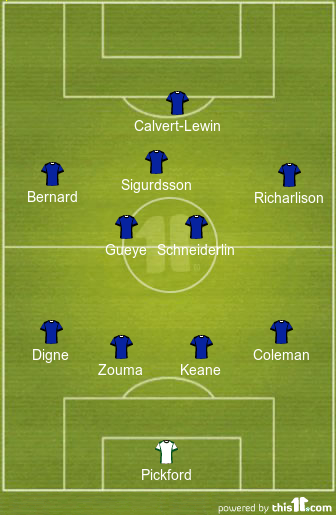