Everton will be aiming to get back to winning ways when they face champions Manchester City at Goodison Park on Wednesday night. This game was actually scheduled to be played in the weekend of the Carabao Cup final but the Cityzens are contesting in that, hence, the league game has been preponed.

Marco Silva’s men were under-par against Wolves and deserved to lose that game. Meanwhile, Pep Guardiola’s men overwhelmed Arsenal and closed the gap at the top of the table. Hence, it is not going to be easy for the Toffees but they are at home, and must give a better account of themselves against one of the best teams in Europe.

Phil Jagielka and Yerry Mina are suffering from respective injuries and wouldn’t be able to come back for this game. Idrissa Gueye has a groin problem and didn’t feature in the last game. It will be touch and go for him. Leighton Baines was subbed off injured against Wolves and is not going to be fit for this game.

He is Everton’s first-choice keeper and starts every league game. The England international needs to improve his game a bit, especially when facing the defending champions. 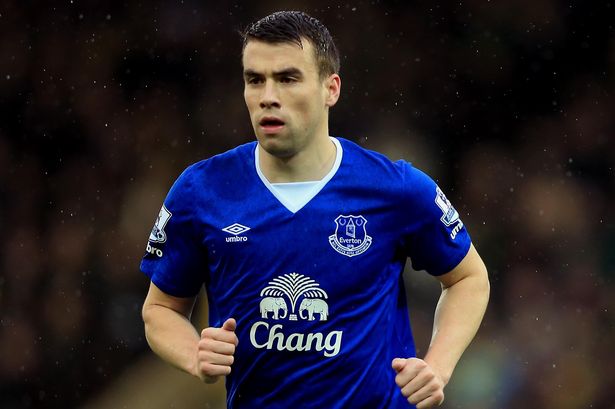 The experienced full-back and captain must raise his game and enable the team to work around him in terms of the intensity level.

He was one of the decent performers at the back for the Toffees. The ex-Manchester United man is expected to start on Wednesday.

With Mina and Jagielka out, Marco Silva has no option but to persist with Zouma at the back.

He was suspended for the Wolves game after being sent off against Huddersfield. The Frenchman should be back in the eleven on Wednesday.

The Portuguese has been decent on a regular basis in the midfield. He will have a big job on his hands against a strong City midfield.

With Gueye a doubt, expect the young Davies to partner Gomes in the midfield. He really needs to play well in order to cope with the quality of the opposition on Wednesday.

The Icelander was below-par against Wolves and has to raise his game against the Cityzens.

The left wing is his best position and the Brazilian will be aiming to run the channels on the counter-attack to cause problems to the City defence.

The youngster will make runs in behind and look to stretch the defence. He has the pace to trouble any centre-back, and Everton should make use of that.

Theo Walcott was under-par once again at the weekend and doesn’t deserve to start. Hence, we may see Lookman on the right wing. 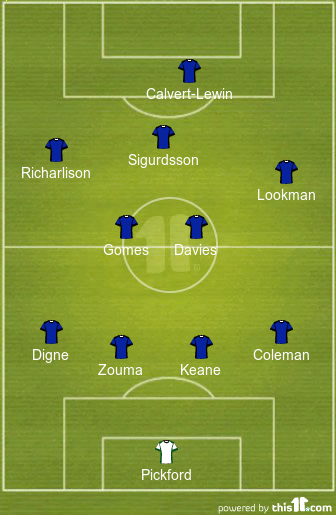