Chelsea get their Champions League campaign underway on Tuesday night when they host Valencia at Stamford Bridge.

After a fantastic display against Wolves at the weekend, the Blues have recorded eight points after five games in the Premier League. Frank Lampard’s side have been one of the most entertaining sides so far this season and come into this game in high spirits.

Antonio Rudiger’s first start since April came to a premature end at the weekend when he suffered a groin injury. While N’Golo Kante still trying to shake off an ankle sprain, Emerson Palmieri could return for this game after missing the Wolves game.

Meanwhile, Callum Hudson-Odoi and Reece James are now back in training in a bid to regain fitness.

Kepa is yet to keep a clean sheet so far this season. So, he’ll be aiming to keep one against Valencia.

Azpilicueta has struggled this season, failing to cope with Lampard’s high-pressing system. Yet, he’s the skipper and will be expected to start on Tuesday.

With Rudiger expected to miss out, Christensen will have the responsibility to organise the backline and lead the way.

Scored a wonder goal in the 5-2 win over Wolves at the weekend. Tomori is expected to get the nod ahead of Zouma in Chelsea’s Champions League opener.

With Emerson touch and go, Alonso is expected to start at left-back against Valencia.

Jorginho has been one of Chelsea’s most consistent performers under Lampard. He is an undoubted starter on Tuesday.

Partnering Jorginho in central midfield will be Kovacic, who generally provides the Blues with a lot of energy and intensity to their play.

With his speed and dribbling skills, Willian will look to cause problems to the Valencia defence.

Mount has been fantastic so far this season, adding creativity, flair and goals to Lampard’s Chelsea. He’s certain to start in his preferred no.10 role.

Pedro will be fresh having been an unused substitute against Wolves. The Spaniard provides a lot of speed, energy and directness to Chelsea’s attack. He should start on the right.

Abraham dominated the weekend’s headlines by scoring a hat-trick at Wolves, taking his overall tally to seven goals from five league games. He is expected to lead the Blues’ attack against the Spanish outfit. 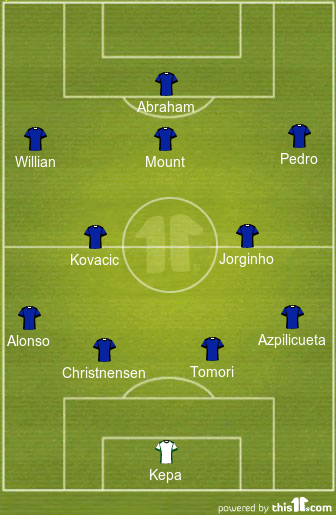