Chelsea will travel to the Besiktas’ Vodafone Arena in Istanbul on Wednesday to face Liverpool in the UEFA Super Cup.

Frank Lampard suffered a 4-0 humbling at the hands of Manchester United at Old Trafford on Sunday in his first game as Chelsea boss. He is entitled to be furious after watching his players collapse at the weekend against Ole Gunnar Solskjaer’s side.

The Blues boss will be tempted to ring the changes in his starting XI against Liverpool as he looks to keep his squad fresh and avoid injury.

Ruben Loftus-Cheek and Callum Hudson-Odoi are long-term casualties for Chelsea. Antonio Rudiger has returned to training but is likely not to be risked against Liverpool.

Willian missed Chelsea’s season opener against United with a thigh injury but could return to the squad on Wednesday.

Kepa conceded four goals against United and will be aiming to do well in the UEFA Super Cup.

Azpilicueta endured a torrid time at Old Trafford and will need to improve against Liverpool on Wednesday.

Zouma was sloppy and looked off the pace at the weekend. The Frenchman will be keen to improve and stop Liverpool from scoring.

The Dane will partner Zouma at the heart of Chelsea defence on Wednesday.

Emerson was one of the rare bright sparks in the 4-0 thumping at United. He’ll continue at left-back.

Kante got a few minutes at Old Trafford and could start the game ahead of Mateo Kovacic.

Jorginho will aim to control the tempo of the game from minute one with his distribution skills. He should partner Kante in central midfield.

Pulisic couldn’t do much after coming on a substitute against United at the weekend. However, he’ll be handed a start on the left flank in Istanbul.

Mount impressed in the no.10 role at Old Trafford, creating openings for his team with his incisive passing. He is a certain starter against the Reds.

A tireless performer, Pedro is expected to start on the right flank on Wednesday. He’ll be keen to make a mark and help Chelsea win the UEFA Super Cup.

Abraham did well in patches against United but Lampard could go with Giroud on Wednesday. The Frenchman’s hold-up play, experience and dominating presence in the box might cause problems for the Liverpool defenders. 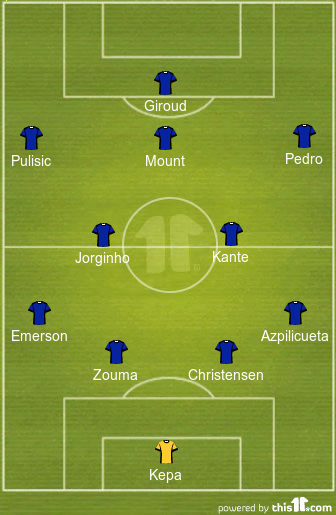